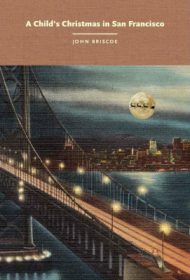 A Child’s Christmas in San Francisco uses the framework of seven poems, written by the author as a child and by other local schoolchildren, to present vignettes of San Francisco’s past.

The author traces the book’s inspiration to his grammar school days, when the voice of Mel Blanc wafted through the airwaves of local station KSFO, letting “us children know, with an audible wink over the radio, that a day in San Francisco belonged to a food, or drink, that originated in SanFrancisco.” For example, Blanc would say “Tuesday… is Red’s Tamale Day.” During the week before Christmas, generations of schoolchildren created their own pairings, Briscoe notes, composing “ditties of juvenilia, in verse from bad to worse,” to celebrate the matchups.

The well-designed book is divided into days of the week, each dedicated to a different food or drink. There’s Red’s Tamale Day, Sourdough Day, Cioppino Day and so on. Each section includes vignettes about the food and beverages and about San Francisco’s past, along with an accompanying poem.

For example, in Tuesday’s section, Briscoe not only describes Red’s Tamales—“Each specimen was wrapped in a ‘husk’ that was not a corn husk but a wraith of something suspiciously resembling newsprint”— but also states where better could be obtained (Roosevelt Tamale Parlor). The accompanying poem recounts how “Uncle George, so given to gorge, happily ambles/ […] far down Bryant Street to 24th/ for a platter of Roosevelt’s chicken tamales.”

While the poems are instances of “doggerel” (“You’ve eaten tacos in Waco/ and awakened a wacko”), Briscoe’s narrative is deft and sure, always evocative, sometimes humorous, sometimes luminous. Numerous black and white photographs garnered from historical collections haunt the pages with faces of long-gone people and places, like the Bank Exchange Bar, that you wish you could still step into.

Luckily, in these pages, you can. A Child’s Christmas in San Francisco should appeal to anyone with a bent for nostalgia, history, or San Francisco.