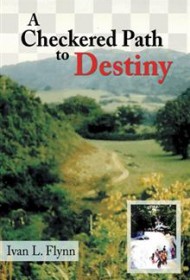 In A Checkered Path to Destiny, Ivan L. Flynn chronicles the events of his life from boyhood in Jamaica through his time as a married man in America.

As an unapologetic memoir, the events of Flynn’s life form the plot. The bulk of the book takes place in Jamaica, where his troubled family lacked steady financial resources. Though Flynn bounced between family members and often kind-hearted employers, he tells of his financial hardships and emotional tribulation with equanimity, not self-pity. He unfailingly perceives missteps and mistakes as lessons learned that turned him into a man worthy of the deep and abiding love he shares with his American wife, Yvonne.

Flynn’s many family members, friends and employers represent the book’s characters, and while some stand out because of the dominant role they played in his life, others — for example, the children of his many employers — are hard to track and could, perhaps, have been left out. However, Flynn’s level of detail also provides insight into the world of Jamaica’s class system during the 1950s and 1960s.

Although Flynn provides ample detail about places, people and events, the book’s sense of time and geography can be difficult to follow. Flynn’s birth date was not recorded, but was estimated to be around 1941. Much of the story centers on his life in the 1950s and 1960s, and while he often places events in time, he also jumps around, producing some confusion about what happened when. As well, readers unfamiliar with Jamaica’s geography would be advised to find a map to help identify where the many places Flynn mentions are located.

Despite its rough spots, A Checkered Path to Destiny may be a satisfying read for those interested in seeing how a wayward but hard-working boy becomes a self-respecting man for whom, as he says, “love really does prevail.”

Also available in hardcoved and ebook.