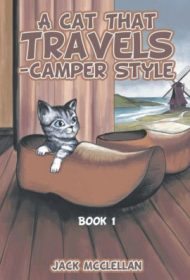 In the children’s chapter book A Cat That Travels – Camper Style, Jack McClellan introduces young readers to Campy, an inquisitive cat who loves to travel.

The Dodds are an American family traveling through Europe in a camper. When they visit Holland, they adopt a four-month-old kitten that the children, Tom and Cindy, name Campy in honor of their home on wheels. As the family journeys to Belgium, France, Portugal and Spain, Campy is overjoyed by the sights they see, the people they meet, and the history they learn.

Campy meows and purrs “in her language” when communicating with the Dodds. Yet, readers are privy to her thoughts, which convey her eager-for-adventure personality. At one point, demonstrating McClellan’s clever storytelling, Campy bemoans her inability to carry a camera like the Dodds. Campy relates instead the scenes and people the Dodds photograph, giving readers added glimpses into their sightseeing.

The book’s strongest attribute is the historical and cultural detail McClellan packs into nine brief chapters. Ranging from the 2,500-year-history of Paris to oxen pulling brightly painted fishing boats from the ocean in Portugal, observation and discovery are emphasized. The book’s instructive value is impressive.

However, with the exception of Campy, the story lacks character descriptions, preventing readers from imagining the protagonists’ attributes. Tom and Cindy’s ages are unknown, and Mr. and Mrs. Dodd have no first names. The photographs and illustrations are adequate, although some captions contain inconsistent capitalization.

In addition, peculiar scenes conflict with the book’s straightforwardness: for example, a figure in a stained-glass window recounts to Campy the story of Napoleon’s coronation as Emperor, and Campy dreams into existence ancestors who witness Marie Antoinette’s beheading. (While the scene isn’t graphic, the topic may be overly sophisticated for some children.)

Despite such issues, A Cat That Travels is an informative, family-oriented book with a perfect, sequel-ready ending. A likable character, Campy’s exploits may help draw young readers into the coming series.