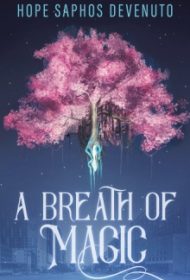 A Breath of Magic is an engaging fantasy about the impact of a mystical and transformative enchantment on the story’s protagonists.

Nicholas and Gabriella are fraternal twins, each with one blue eye, one brown, olive skin, sandy hair and “a curiosity that is off the charts.” At age nine, they are beginning to want to separate; Gabby feels superior to her brother, and Nick has a stubborn streak. Meanwhile, their parents, Jacqueline and Eddie, have secret sorrows: Eddie has PTSD after serving in the military and has been forced to take a low-paying job; Jacqueline suffers from the distance between them.

In the urban neighborhood where they live, the children have contacts with many residents with their own hidden problems. But they find a spark of genuine happiness being walked to and from school by George T, or Mr. Thomas, a strange old gentleman who infuses them with rays of psychic energy, encouraging them to breathe deeply and go inwardly to faraway places.

Gradually, George T’s influence transports the twins to magical realms where Gabby meets the Earth Mother and Nick finds he can communicate with Mr. Crow. These changes affect the way the children perceive and relate to their parents, neighbors and schoolmates. Even as George T quietly begins to fade out of existence, the children learn important life lessons.

Author Hope Saphos DeVenuto is a practitioner of Energy Symmetry, a discipline she undoubtedly has drawn upon in crafting this novel. Based on a simple thesis—that the “magic” of positive energy can infuse one’s activities and have a helpful effect on others—her story moves pleasantly towards a satisfying conclusion.

This aside, the overarching theme and DeVenuto’s way of revealing it through her imaginative plot line make this a promising offering for young and older readers alike.