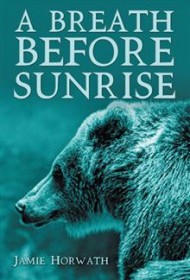 Jamie Horwath’s short novel is set in a post-apocalyptic world where humankind has been forced underground because of the proliferation of nebulous “binary cell mutations.”

Revolving around three characters — Bear, Bird, and Fox — all of whom were born and raised in a subterranean society that is described as “militaristic” and “patriarchal, the storyline initially follows Bear as he tries to complete a dangerous mission on the planet’s surface. He is a Collector, a person whose job it is to track down and return Observers (“human tape recorders” disguised as robots) to the Elder Council. But in his travels across the wasteland, Bear’s perspective of life has been radically altered by what he has found in the ruins: magazines, postcards, etc. He has decided to go rogue and remain aboveground. Two of his childhood friends (Bird and Fox) are sent to either retrieve him — or kill him.

Particularly with a theme that examines free will, an obvious strength of this storyline should have been the dichotomy between the repressive society below and Bear’s limitless freedom above. Post-apocalyptic cultures are undeniably intriguing — A Canticle for Leibowitz by Walter M. Miller, Jr., Sophie Littlefield’s Aftertime trilogy, ’70’s cult movies THX 1138 and Logan’s Run, etc. — but Horwath’s society is only superficially explored; an opportunity to enrich the storyline and intensify the theme was lost. The biggest concern, however, is the awkward narrative, which is replete with ill-phrased prose such as, “shrieks begged for attentive ears” and “the appendage shook and screamed.”

Although this novel has some remarkable moments, especially towards the conclusion, the prevalence of gaping plot holes concerning the underground society, the creatures, etc. — and an unwieldy narrative makes this a potential-laden but ultimately forgettable post-apocalyptic yarn.