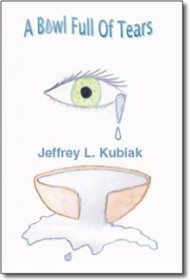 The poems in Jeffrey L. Kubiak’s collection cover a wide range of human experiences, written in a voice that is always honest and revealing of his feelings. From exulting in the wonder of God to wondering over heartbreak and depression, A Bowl Full of Tears often takes readers to the well-tread, though rich, territories of family and daily life. Additionally, the end of the book presents the work of several guest poets.

All the poems in the collection are centered on the page, and many use end rhyme to propel the reader to the next line. While the rhymes are solid, many are unsurprising. For example, the poem “Final Destination,” which uses the metaphor of a train trip to describe death and the afterlife, begins “The train rolls out of the gloomy station / Taking me slowly to my final destination.” This reliance on rhyme makes for tidy poems that quickly explore a subject but do not necessarily deliver readers to places that they did not expect. The most successful poems are those, such as “An Early Morning Stroll” and “The Conspiracy Theory,” that deliver a surprise punch of humor.

Overall, many of the poems close with an interesting line or thought. For instance, by the end of “Final Destination,” as the train pulls out of the station, Kubiak writes, “I stare out the window at the distraught faces / Heaven just might be one of those lonely places.” As is typical of the pieces here, that end sentiment of heaven being lonely instead of joyful is spectacular and could be a great subject in itself if the poet freed himself from the dictates of rhyme and allowed himself to explore more inventive ways of examining the world.