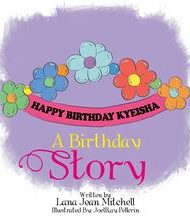 Kyeisha is eagerly counting down the days until her birthday, when she’ll get to have a class party. Her grandmother is making cupcakes, and her mother gives her instructions about what items she’ll need to bring to the party. She also plans to get a new outfit.

The story opens with Kyeisha’s grandmother speaking, and the clear personality in her voice is a promising start: “Girl!” she says, “I don’t think that calendar is going to last until your birthday…you’re going to look all of the dates right off the paper!”

Unfortunately, the story quickly loses focus, meandering through loosely related topics and providing excessive detail. Characters such as the grandmother and grandfather are introduced with too much background information, including the grandfather’s claim that “He has almost enough children for a baseball team.” Readers are then given an overabundance of details about cupcake preparation, the shopping list, and party items. In one passage, Kyeisha mentions that she will buy party plates with a picture of Harriet Tubman on them. This is followed by biographical information about Tubman that interrupts the story’s flow.

Although the book invites readers to share Kyeisha’s excitement for her coming celebration, the narrative lacks a compelling story arc. The flow throughout is erratic, and there is no payoff for readers in the end, as the tale concludes before Kyeisha’s party. There are also several errors, including sentences duplicated on two consecutive pages.

Despite issues with the prose, the illustrations are effective, and are by far the richest aspect of the story. Overall, Happy Birthday Kyeisha requires further polishing to generate wide appeal.