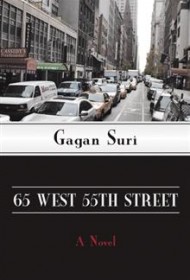 Love conquers all in investment banker Gagan Suri’s sentimental novel, which gets some grit from its realistic portrait of striving South Asian immigrants in North America.

Zeina and Karan fall head over heels the moment they meet in front of her Manhattan apartment (at the title’s address). Why wouldn’t they? She’s gorgeous and a great cook; he’s handsome and supportive. They both attended U.S. schools and hope to make careers in the U.S. — she in fashion, he in the hospitality industry. But they have one big problem: she is a Pakistani Muslim and he is an Indian Hindu.

Zeina’s terminally ill mother has hysterics at the very thought of her marrying outside her religion; Karan’s parents and older brother are convinced she’s a scheming slut. Both families lay on the guilt, while the lovers tearfully vow they will somehow win their relatives’ acceptance.

This strong situation is, unfortunately, weakly rendered: the characters are shallowly drawn, the dialogue stilted and the prose pedestrian. The book reads more like undigested autobiography than creative fiction, an impression reinforced by the fact that Karan’s biography is virtually identical to the author’s.

However, Suri’s firsthand experience also accounts for the compelling chapters in which Karan quits a dead-end job and relocates to Toronto, where he hopes to pursue an MBA and permanent resident status, only to find work and opportunities frighteningly elusive. Zeina remains loyal and moves to be with him; the families slowly come around, and the story wraps up with the joyful assertion that “love goes beyond boundaries.”

This is no literary masterpiece, certainly, but you’d have to be a real Scrooge not to be touched by Suri’s sweet, sincere portrait of two nice young people who refuse to let barriers of religion, nationality, or ethnicity stand in their way.