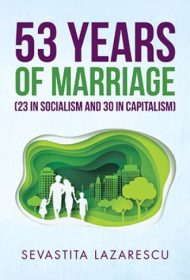 Despite harsh conditions and famine, Lazarescu’s family trusts in God to help them through hardships. In 1966, the author meets Gabriel; they marry and have two children. But they must leave their kids under the care of the author’s parents as they struggle at demanding government jobs on a farm.

One day, while doing agricultural field work, Gabriel fails to return home. Weeks later, the author learns he secretly escaped to Yugoslavia in search of a better life for the family. Eventually, they all end up in Australia, leaving the harsh austerity of their early lives behind.

This chronologically written memoir employs well-placed dialogue and interesting cultural detail. For instance, in describing family Easter traditions, Lazarescu writes of an egg-tapping competition in which it is held that the person whose eggs are unbroken will enjoy the longest life. The writing can also be vivid, at times, as in this elegant passage in which the author describes walking through pine trees: “In places with no disturbances, you could hear the snowflakes falling down with a certain noise, as if a lady dressed in a silky dress was swiftly passing you.”

Unfortunately, such moments are infrequent, and the story is “told” more often than “shown.” For example, as the author desperately searches for her missing husband with her children, she states: “I was overwhelmed by everything. All of us felt a huge emptiness…” Such flat pronouncements lack the emotional resonance required to keep readers riveted to the page. Additionally, the book ends rather abruptly, leaving readers unsatisfied.

Due to such issues, the story isn’t likely to draw a general audience. Even so, it’s an historical account that will surely be treasured by the author’s family and friends.