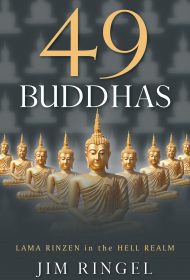 We meet protagonist Lama Rinzen Naraka, a Buddhist monk, when he’s reincarnated as a young private detective on seedy Colfax Avenue, a street cutting through the heart of the city. For him, this is the Hell Scape, one of the Six Realms of Existence he passes through, life after life. His mission is to recover the “dorje,” a ritual object that will allow him to bring enlightenment to all. “I have not been a detective before, but I know its tricks,” Naraka says. “To see things as they are without expectation.”

Hired by the local police as a freelance investigator, Naraka is assigned to the murder of Sonny Heller, one of three brothers who rule the city’s insurance market. Here, Ringel invents a spectral Tibetan underworld that escapes notice of the city’s “gweilos” or white devils. A big clue is that Heller has been killed via Lingchi, an ancient Chinese form of torture and execution.

There’s a dame named Abril involved; readers will question whether she’s a damsel in distress or a femme fatale. Also in the mix are Naraka’s ghostly teacher Daidyal; a grizzled police detective, and a Chinese customs officer who might be a spy.

Those expecting a conventional mystery should be surprised—and thrilled—by this original take on the noir genre.