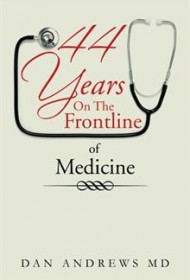 As the title suggests, this memoir chronicles Dan Andrews’ more than four decades in medicine, beginning with his earliest years when he set his sights on earning his medical degree, through medical school, his stint in the Air Force and private practice. From slippery newborns to tattooed private parts, drug overdoses, psychiatric meltdowns, snake bites and food poisoning, it seems Andrews has indeed seen it all.

The tales here are rendered with great detail, covering years when the medical community saw many changes in treatment and tools. Some of the stories are grim, occasionally ending in death, sometimes due to a medical error. But there are plenty of light moments, too, and Andrews manages a candid, matter-of-fact tone that aptly fits each tale; he is sympathetic without being sentimental, humorous without being silly. He also does a fine job of revealing the behind-the-scenes personalities and practices in a medical facility, while offering a perspective that patients don’t often experience.

In one early tale, for example, he writes of a point system students and residents developed to indicate how bad a new admission was: “You got five points if the admitting orders started with “bath stat” [the order given, usually for a street person, who needs just that — a bath] and another five points if the orders ended in ‘sorry.’ … It was worth five points if a patient was found in bed with another patient.”

This is an interesting and revealing read. There are occasional editing errors, such as “air force” rather than “Air Force” and “farther” rather than “further.” And the constant anecdote-after-anecdote narrative style can begin to feel a bit monotonous at times. But largely, Andrews does a solid job of weaving the narrative thread in an engaging voice that invites the reader to curl up for a good read.

In short, 44 Years on the Front Line of Medicine is likely to please a wide audience.