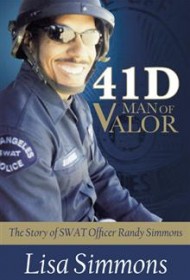 In this book, Lisa Simmons chronicles the life and untimely death of her law enforcement husband, who was gunned down in the line of duty.

Randy Simmons was a determined boy and a driven man. After a stint as a star college football player, he joined the Los Angeles Police Department’s SWAT unit. He and Lisa were a happy couple for 17 years, enjoying their two children and many activities. Randy reached out to underprivileged children, driving to the projects to give out candy, sermons, clothing — whatever was needed. They were a churchgoing family, and often Randy – definitely the man of the house – would lead them in prayer.

The last night of his life, Randy called the family together to pray. Readers know what’s coming, but will still be unprepared for the slamming pain of the late-night phone call from a stern SWAT officer. He told Lisa that Randy, 51, had been shot and that someone would take her to the hospital. The description of that night, and Randy’s involvement in a tense hostage rescue situation, will have readers sobbing.

The first LAPD SWAT officer killed in the line of duty, Randy became a symbol for every cop. Cards, letters, bouquets and visitors overflowed the house. His funeral was attended by 10,000.

This is a very personal account, with praise heaped on Randy at every turn by the woman who loved him. While her devotion is understandable, one wonders: could anyone really be this good? The writing is rather formal, with an abundance of adjectives. Although Randy’s life is inspiring, ultimately we learn more about Lisa as she puts his thoughts into her words. She never details his skill as a police officer — surely one of the reasons he was so honored — which presents a void in the narrative.

Such limitations result in a book that, while detailing the life of a noteworthy man, is unlikely to satisfy general readers overall.