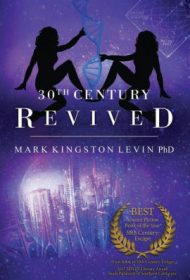 After revealing to her husband Marty that she is part of a secret society of scientists from the 30th century, Jennifer Hero attempts to adjust to her new life in the 21st century, mend her relationship, and start a family. She also explores her sexuality by inviting her husband into the world of swinging.

Yet their world is shattered by the news that Jennifer’s friend Kyoko has been kidnapped by North Korean terrorists. Jennifer must employ all of her scientific knowledge, 30th century technology, and secret agent training to save her friend, even when the mission threatens her life and her marriage.

The author rivals Jules Verne for the level of scientific detail used in his novel. Everything from floating cities to DNA modification is thoroughly researched and described in painstaking detail.

Unfortunately, this trivia completely overshadows all characterization and storytelling in the novel, making for a bland and often frustratingly tedious read. For instance, a devastating spaceship crash is described with the same emotional weight as picking berries.

The novel is also lacking a through-line, making it read more like a collection of random events, many of which have little impact on the rest of the plot. Almost half of the book focuses on the characters taking vacations, announcing their plans, or having extended group sex sessions.

These erotica elements, which take up a large portion of the book, are overly long, unstimulating, and do little to serve the science-fiction/thriller portions of the plot. As the book goes on, they also become increasingly disturbing, with graphic depictions of rape and incest that are more gratuitous than arousing.

While the science and technology may hold some interest for science fiction readers, their prominence combined with a lack of cohesive storytelling will deter most other readers.