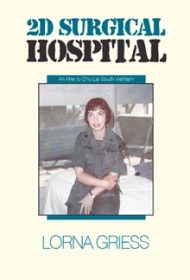 Much of what we know about war is told from the battlefield, with combat at the heart of the story. In 2D Surgical Hospital: An Khe to Chu Lai South Vietnam, Lorna Griess offers another perspective: that of a nurse tasked with healing the direct consequences of the fighting.

Griess worked in a Mobile Army Surgical Hospital—the MASH units the TV show was named for—during the Vietnam War. She was just 28 and bored with work as a Navy nurse when she decided to opt for duty in Vietnam. She quickly got more excitement than she bargained for.  Griess describes adapting to spare living conditions, working without sleep, the camaraderie of her coworkers and the uneasy relationships they forged with the civilian population. Medics would treat the locals during lulls in the fighting.

Photos give a sense of the locale and people, but it’s Griess’s clean, detailed writing that lets us picture a mobile hospital in operation. Her spare writing often mutes the emotional ups and downs of the job. For example, she describes riding in a helicopter and seeing small puffs of smoke below, then realizing that it was enemy fire trying to take the chopper down. Upon landing safely, she notes without fanfare: “It did not take long for the company clerk to come and pick me up. I was glad to be back home.” Yet she also describes her fear of telling a young soldier that he has lost his right arm below the elbow and notes that such sights and sounds still haunt her. “Tears are filling my eyes and cascading down my cheeks as I write this.”

2D Surgical Hospital is not about the politics of the war, just the job of being a nurse and treating the wounded. Griess offers a precise, straightforward account. While some might wish for more narrative flair, it’s a solid addition to the historical record of one of America’s most divisive wars.