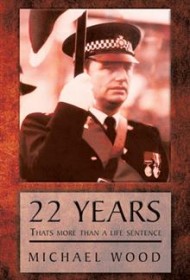 Englishman Michael Wood served 10 years in the British military before becoming a local police officer during 1985. He kept notes about his police training and service in Northamptonshire, and three years ago published selected portions as a book.

Because police work is inherently dramatic from time to time, occasional portions of Wood’s account offer insight into how an “average guy” handles stressful situations when forced to confront lawbreakers. The boring portions of police work–completing forms, sitting at desks, patrolling endlessly during quiet times–also receive attention from Wood, giving the book a welcome balanced feel.

Wood’s writing style is conversational, not literary. Often, this approach is appealing, as readers are likely to feel comfortable in Wood’s world of police work. But because Wood is weak with grammar and punctuation and because he has difficulty organizing passages and chapters into a cohesive, compelling narrative, the book is a challenge to digest.

Throughout this story of his career, Wood comes across as self-deprecating, and yet seems to enjoy his police duties for the most part, even though he feels limited by his shortcomings. As a result, the final pages of the book come as a surprise; Wood reveals that heavy consumption of alcohol wrecked his first marriage and is in danger of wrecking his second. Wood comments that he has left the police force and is residing in Portugal, noting that he has difficulty finding profitable, full-time employment and is bored and lonely. He suggests he will never recover good health and closes the book with this sentence: “That’s what being a police officer has done for me.”

It is easy to feel a bit sorry for Wood due to his downward spiral. But because he fails to lay an adequate foundation for his depressed state, readers are likely to feel sandbagged rather than deeply sympathetic at book’s end. As a result, Wood’s work fails to realize its potential.