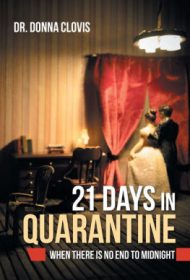 It’s inevitable that the nightmarish events of 2020 eventually spark an outpouring of reflection in essays, books, and movies. One early entrant is by award-winning journalist Donna Clovis, who captures how isolation forces us to live within our own heads and how reality can feel as if it’s slipping from our grasp.

In this novella, Clovis crafts what she describes as a stream-of-consciousness diary of a murder in which her carefully appointed dollhouse becomes a metaphor for the detachment she feels inside her own home. The story of what happens one terrible night during New York City’s lock-down unfolds like fleeting thoughts, skipping from past to present, sometimes lightly glancing across an idea or image, sometimes landing with precision: “The masks make me learn how to read the eyes of people instead of their lips. The masks teach me not to trust,” she writes.

Clovis intentionally conveys a blurry nostalgia of happier times with her father, but always with doom closing in. When violence erupts, she retreats even further inside herself as the act’s details remain unclear. “I second guess the shadows on the wall. I crawl on my hands and knees through my bedroom rabbit hole anticipating more shots fired by cops only to encounter myself.”

The dreamlike imagery, purposely vague to disorient readers, is this work’s strength—although it can also be frustrating. The jumble of words closely matches the jumble of a mind trying to latch onto what is real.

The misstep comes late in the story where Clovis employs a more traditional style to catalog society’s historic racism and current hatred of journalists. While important topics and perhaps included to reflect the narrator’s state of mind, the abrupt change feels misplaced against the earlier fluid structure.

Clovis’ work is densely worded and sometimes her beautiful prose gets in the way of itself. Readers may have to work hard to connect the threads, but ultimately, this intriguing story is worth the effort.