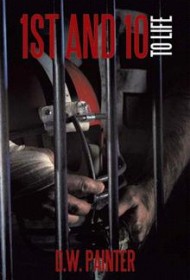 The novel 1st and 10 to Life depicts the tragedies and triumphs of Chuck Moses, a young man in Utah whose life changes radically following a horrible accident after he graduates from high school.

The first half of the book paints a comprehensive picture of Chuck’s life through high school and just past graduation, dealing with his Type 1 diabetes and his burgeoning work as a sportswriter. Chuck’s Christian faith also becomes a recurring theme as it’s tested by circumstances surrounding him and his actions.

At the book’s midpoint, Chuck kills an elderly woman while driving drunk and receives, as the title indicates, a 10-to-life prison sentence. In prison, Chuck shows a remarkable aptitude for football – despite having played basketball in school – and goes on to play professionally (for the fictional “Salt Lake City Saints”) after being paroled. He finds love, reaffirms his faith and helps his team find success, leading to a showdown with an old nemesis at the Super Bowl.

The author provides solid characterization for Chuck and other characters.  However, the plot developments throw reality out the window, starting with the notion that NFL scouts would attend football games at a prison and pursue potential recruits there, much less that Chuck could become an NFL running back after nearly a decade in prison – and do so while still on parole.

Additionally, the text requires a thorough copyedit.  More than a dozen different types of grammar, spelling, capitalization and formatting errors show up repeatedly in the first three pages – and the remaining 389 pages follow suit.

The book would, perhaps, interest those inclined toward the religious and sports themes of the plot, but its many “R-rated” situations and language could be a turnoff for religious readers. Meanwhile, its writing mechanics will make this novel a challenging experience for most readers.