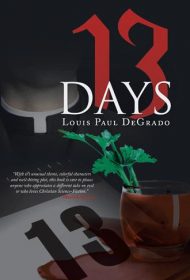 In 13 Days, the sequel to The 13th Month, a diverse group of people embark on a battle against evil.

The story centers on a priest, a Native American shaman, an archaeologist from India, a professor and a psychiatrist – all tasked with battling dark entities called Shadows, an evil force waging war by placing thoughts in people’s minds, whatever the individual struggles with most. An ill-conceived plot to send armed soldiers through a portal to battle the Shadows starting in 13 days must be stopped; military weapons are ineffective in this mind war, and failure might allow the Shadows to overrun the Earth. Chapter titles count down the days, from 13 to 1, as the participants plan how to deal with the Shadows.

Author Louis Paul DeGrado’s complex, suspenseful plot is interesting to the final page, conveying the timeless message that the world’s religions must unite to defeat evil. He deftly weaves in plot points from the first book, allowing new readers to easily follow the storyline.

The story blends in many diverse topics. His characters discuss the history of evil, including sources from legends and ancient Christian books not included in the official biblical text. They also explore how evil might be energy that is never destroyed, simply changing form.

Symbolism enhances the storyline. Water is healing; the savior character is referred to as an owl that can “see what others cannot” but is also a sign of death; the sky darkens after the savior sacrifices himself similarly to Jesus’ death on the cross.

It’s unfortunate that the characters lack depth; when someone is injured or dies, readers are unlikely to care because they aren’t emotionally invested in them. But the compelling plot keeps the pages turning.

The book is likely to intrigue an audience beyond Christians. Its message that our actions have a ripple effect in the world is a universal theme for those who enjoy a complex, religious-themed plot.