Although David Oppegaard is undeniably an extraordinary writer — his debut novel “The Suicide Collectors,” published in 2008 by St. Martin’s Press, is one of the most disturbing and singularly unique works of apocalyptic fiction I’ve ever read — his experience navigating the publishing gauntlet is anything but extraordinary.

Oppegaard is one of a quickly growing group of writers who are publishing both traditionally and independently. Hybrid writers, they’re being called: the literary equivalent of a Toyota Prius. 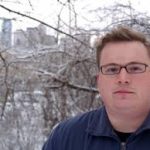 Late last year, he self-published his third novel, an utterly readable young adult quest fantasy entitled “The Ragged Mountains.” Comparable tonally and thematically to Ursula K. Le Guin’s classic Earthsea trilogy, the story is set in a realm known as the Western Lands and revolves around 16-year old Gabriel Rain, a blacksmith’s apprentice whose beloved girlfriend Penelope gets abducted by raiders. When the inhabitants of the sleepy little town all but write her off, Rain — along with Penelope’s brother and younger sister — sets out to find and rescue her. Thus begins a quest — and a journey of self-discovery — of epic proportions…

In a recent interview for BlueInk Review, Oppegaard talked about his experience self-publishing and offered up invaluable advice for those writers contemplating going that route.

PGA: You’ve published two critically acclaimed novels through St. Martins Press — The Suicide Collectors and Wormwood, Nevada. Your third novel The Ragged Mountains is quite a departure for you. It’s a young adult fantasy, while your first two were apocalyptic-themed fiction. What was the motivation behind writing The Ragged Mountains? And why did you opt to self-publish?

DO: I wrote The Ragged Mountains after the sales numbers for The Suicide Collectors and Wormwood, Nevada weren’t as great as we’d been hoping, despite much critical success. After writing two novels that really straddled multiple genres, I wanted to write a novel geared specifically toward the red-hot YA fantasy market, something my agent could sell without a lot of explanation.

I decided to self-publish after multiple traditional publishing rejections, including one that came so close that I’d already spoken on the phone with an editor who told me how excited to be working with me they were. I figured The Ragged Mountains was too good to bury and at least, if anything, self-publishing would get it out into the world.

PGA: On one hand, I find it hard to believe that a big publisher didn’t snatch up The Ragged Mountains, but on the other hand, it’s not surprising at all. I’ve read so many extraordinary self-published novels in the last few years that have been rejected numerous times by major publishers — and more than a few terrible novels that have been released by those same publishers. The publishing industry is in flux right now and I think self-publishing (digital self-publishing, in particular) offers readers a cheap, abundant, and incredibly diverse alternative with virtually limitless creative potential.

DO: Yes, the traditional publishing model seems very unwieldy in the year 2013, and it’ll be interesting to see how the industry adapts to survive. Somehow the market needs to change in such a way that good work breaks through more regularly and finds readers regardless of how it is published—we need to step beyond the traditional vs. self-publishing debate and ask how we can best get great work out to the most readers possible in a way that is reasonably lucrative to its author and less reliant on sheer dumb luck.

PGA: Agreed. In the last year, it seems as though there has been a radical increase in the amount of traditionally published authors going the hybrid route. What are the advantages, if any?

DO: Traditional publishers still give an author that gold stamp of recognition and name brand backing, along with (sometimes, if you get lucky) a pretty healthy marketing machine. Yet self-publishing allows an author greater hands on control of their work, more freedom to publish whatever the hell they want, and the ability to handpick the creative team that pushes their work out into the world. I truly enjoyed working with the team (all friends of mine) that helped put The Ragged Mountains for sale online.

DO: I originally conceived of The Ragged Mountains as the first in a trilogy and still have the outlines of the next two novels sketched out in a notebook (the second book was going to deal with what Gabriel encountered in The Savage Ocean and the third book was going to bring a major war right to his hometown). I’d love to finish the trilogy but I’d need the prodding of greater sales, through whatever publishing method, to justify the time and effort of two more books. Luckily I feel The Ragged Mountains stands well on its own at this point!

PGA: Given your experience with self-publishing this novel, is there any aspect of that process that you wish you would’ve done differently?

DO: I wish I would have been able to spend more on marketing. Also, I regret buying an ISBN number for the book since Amazon doesn’t require you to have one and actually seems to prefer its own ASIN system.

PGA: Interesting. What would be the biggest single piece of advice you would give those aspiring authors contemplating going the self-publishing route?

And keep on writing that next book!

Paul Goat Allen has been reviewing books full-time for almost 20 years, including writing for BlueInk Review, a service devoted to reviewing self-published work exclusively. In addition to BlueInk Review, his work has appeared with BarnesandNoble.com, The Chicago Tribune, Publishers Weekly, Kirkus, and more. Readers of this blog are offered a $75 discount on a BlueInk review by using the discount code D7G2. (This in no way guarantees a review by Allen.)