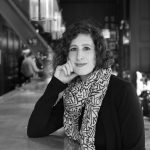 For the last 25 years, one of the joys of my job as a book reviewer has been discovering indie releases that are so extraordinary that the impact of the reading experience resonates with me for weeks, months, and sometimes years, afterward. Novels like Stepan Chapman’s The Troika, The Fairest Flesh by K. P. Kulski, Jaye Wells’ High Lonesome Sound, and The Nosferatu Conspiracy by Brian James Gage—to name just a few—are precious literary gems that I’ve been lucky enough to read over the years.

BlueInk talked to Merbaum a few days before the official release of The Gold Persimmon and discussed the advantages and disadvantages of genre categorization, marketing, and mixed drinks.

BIR: So, I have a love/hate relationship with category tags in literature. On one hand, they can be misrepresentative and confining but they’re also necessary for marketing and can help readers identify releases they might enjoy. Various sites have The Gold Persimmon categorized as literary fiction, suspense thriller, and horror. What would you classify it as?

LM: I would categorize The Gold Persimmon as “welcome to the bizarre-o world of my imagination!” In all seriousness, the novel is all the things you’ve described, in addition to being experimental feminist horror. The publisher, Creature Publishing, exclusively produces what is broadly defined as “feminist horror,” a little-known but helpful label that hones in on the gender dynamics and intersectional identities at play in this book, explored through some of the tropes of horror. I would also emphasize the label “queer.” This book defies expectations about how narrative is structured and focuses on a variety of queer characters, without necessarily catering to a straight, cis audience. So there is a kind of “queering of the narrative” taking place.

BIR: I would definitely agree with that… So, a big strength of this novel was the depth of character development—there were so many fully realized characters! Clytemnestra, the somewhat sheltered front desk attendant at The Gold Persimmon; Jaime, the nonbinary character who gets trapped inside a sex hotel during an apocalypse; Zosiah, whose history is as foggy as the strange cloud surrounding the hotel; Calle and Ruth, whose meeting has unforeseen consequences…. These characters were so real, so authentic, so identifiable. From a writing perspective, why was character development in this particular narrative so monumentally important, and were there any specific approaches you utilized to make these characters come alive on the page?

LM: As a reader, I’m less interested in stories with archetypical characters who lack nuance, fallibility, or contradiction. So, as a writer, I want to get under the skin of my characters. Yet I found this challenging when writing Jaime’s portion of the story, as I was limited to their perspective as a narrator. One solution I found was to focus on the physical. So much is expressed about a character from the way they walk or dress, their expressions and gestures. Second, Jaime is a writer, so I allowed them to read into scant details. For example, they notice a picture of [the hotel manager] Edison’s daughter on his desk and imagines an entire relationship between parent and child based on that one observation, which produces empathy for Edison out of something Jaime just made up. This was also strategic. This novel is about grief, loneliness, sexual awakening, the body, but it also explores storytelling itself and how writers reconstitute their observations and experiences into narrative. I wanted the reader to be able to observe Jaime’s process and identify their interests, pain, and knowledge in the story they craft.

BIR: Without really giving anything away, I thought the last line of this novel was so incredibly profound. With just a few words, you said so much: “This is where you begin.” In my mind, that seems to be the big takeaway here, the kernel of wisdom that you’re sharing with your readers.

LM: The Gold Persimmon is a kind of labyrinth—it certainly was for me when writing it. You reach the center, and then what? You have to find your way back out again, and so the end is also the beginning, a narrative ouroboros. The book is intentionally structured so that each section sheds light on the one that came before. At the end of Part II, you realize who’s really controlling the story in Part I. Part III returns to that thread and offers further revelations. I imagine some readers are going to want to go back to the beginning once they finish and read it all over again, which is a great idea in my mind. I enjoy re-reading novels and discovering new details or nuances I hadn’t picked up on before. Who says a book should be designed to be experienced only once? Can’t the story go on and on through re-reading and re-examining the text?

BIR: I couldn’t agree more! As a full-time reviewer, I usually don’t get the opportunity to read novels multiple times but those rare times that I have reviewed a novel twice (for a 10th anniversary edition or whatever), I’ve found my reading experiences vastly different, which I find so intriguing. I can absolutely see myself reading The Gold Persimmon again and experiencing it differently….

So, just to obsess over that last line a bit more: “This is where you begin.” Is there an existential message there to your readers? I found it motivational, inspiring. The past is the past. Everything that you’ve experienced up until now has made you uniquely You. You are in the process of Becoming who you’re supposed to be. Every day offers new opportunities. This is where you begin. Am I reading too much into this?

LM: No, you’re not reading too much into it at all! It’s a tad tricky to dive into the end without giving away too many spoilers, but here goes… This novel is about storytelling and while it demonstrates how trauma shapes the narrative, it also says something about the power of moving on and letting go. After all that she’s been through, after her illusions have been shattered, that last line does deliver hope for Cly and her future. A whole new chapter is bound to open up for her. It’s the same for Jaime, who we know at that point survived long enough to make this book possible.

BIR: The biggest challenge for an indie author—for any author, really—is finding a way to publicize your release, to somehow make readers aware of your novel. And it has always been this way—even in the days before the Internet, indie writers struggled mightily getting the word out. So, an interesting topic here…. Your novel is fantastic—but your reading audiences aren’t necessarily overlapping. The Gold Persimmon should appeal to horror readers, yes, but also queer fiction afficionados as well as literary fiction fans. How are you planning on attempting to make those audiences aware of your debut novel?

LM: It’s both a challenge and a strength to write across genres. I’m hoping for a swath of reviews and interviews from magazines and blogs that cater to different sets of readers, from the literary crowd interested in innovation in form to the hardcore indie horror fans. In the meantime, I employ boozy beverages as a lure.

BIR: I was just about to mention this! You’re also a renowned mixologist and have a pretty amazing Instagram account (pickyourpotions) where you share some of your amazing literary-inspired alcoholic potions. And some of your drinks have been featured in the Los Angeles Review of Books!

LM: Whatever you may like to read, you can appreciate cocktails and mocktails inspired by contemporary literature. Booktails have become my hobby/side hustle and they do indeed bring a variety of readers to the yard.

BIR: If The Gold Persimmon were a mixed drink, what would its ingredients be?

LM: Actually, The Gold Persimmon is already a mixed drink! I created a compendium of six cocktail recipes (with corresponding mocktails) inspired by the moods and themes of the book. There’s one called The Fog, another favorite is Sex in Mirrors. All pre-orders receive a digital copy and I’ll soon be selling print copies as well via my website for those who’d like a paper edition, or didn’t get a chance to pre-order before the book’s release. Readers are free to contact me to reserve their copy in advance.

The Gold Persimmon cocktail contains bourbon, mezcal, Earl Grey tea, homemade hibiscus syrup, ginger shrub, and aromatic bitters. You can scope it out on my Instagram, along with a variety of drinks based off my favorite books of all genres, from memoir to poetry to sci-fi to feminist horror.

Meanwhile, I’m putting together a book of booktails inspired by my favorite speculative reads. I have a few publishers in mind for that project, so stay tuned!

BIR: I love the fusion of mixed drinks and literature. What a great way to market yourself and your work! So, speaking of marketing… releasing a novel during a pandemic has complicated matters, right? Have you considered virtual book signings?

LM: Oh boy, does it ever, especially if your household is immunocompromised. My launch is a virtual event on 10/5 at 9 PM EST via The Booksmith in San Francisco, one of my all-time favorite bookstores. I’ll also be reading virtually at the Flint Public Library on 10/20 at 6 PM EST. Additionally, I have plans to put together Zoom or IGTV events with fellow authors. I may even get some musical guests to join the party. For updates, readers can subscribe to my newsletter, The Cauldron, or check out the Events page on my website.

BIR: We’ve had some great conversations in the past and I’ve always come away from those talks invigorated. Your passion for what you do is contagious. I don’t get that from some of the authors I’ve met and/or interviewed. Any advice to writers out there who are struggling with writing, getting published, selling their work? Publishing can be a brutal business. If you could give your younger writer self some advice, what would it be?

LM: Engage in good literary citizenship. If another writer’s work moves you, tell them so. Talk openly and repeatedly about the books you love. Write reviews, even if it’s just on Goodreads. Attend events when you can and make the extra effort to support your favorite authors by buying their books, asking your library to carry their books, and actively following them on social media. Writing is a solitary act, but being a writer is a team sport, as Matt Bell says.

In the meantime, read as much as you can. Read broadly, wildly. Read work that challenges you, that you think you won’t like.

Write the same way. I always knew I wanted to be a fiction writer, so it took me a long time to realize I could both enjoy and benefit from publishing essays or reviews. I completely missed out on the heyday of the blogosphere.

Lastly, expect your road to be roundabout and full of potholes. Nothing is going to go the way you think it is, and that’s okay.

Paul Goat Allen has been reviewing books for more than 25 years. In addition to BlueInk Review, his work has appeared with BarnesandNoble.com, The Chicago Tribune, Publishers Weekly, Kirkus, and more. He also teaches in Seton Hill University’s Writing Popular Fiction graduate writing program.