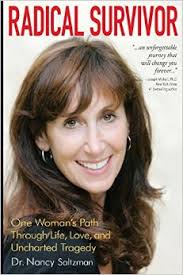 “The Real Cost of Self-Publishing” is an ongoing blog where we ask a self-publishing author to break down his or her expenses, in order to give others an idea of the costs involved in creating a successful book. Today, we talk to Dr. Nancy Saltzman, author of “Radical Survivor.”

Saltzman’s nonfiction memoir tells the incredible story of her survival in the face of recurrent tragedy. In 1995, with these dreaded words, “They found the plane. There were no survivors,” Saltzman entered a nightmare that would haunt her in the days, weeks, and years to come. Her husband Joel, the successful owner of a tennis shop, and her two sons Adam, almost 13, and Seth, 11, had been killed in a private plane accident, along with the pilot and his wife. The family had been attending a tennis tournament in Las Vegas and celebrating Seth’s birthday; Saltzman had flown on a commercial airplane because the private plane didn’t have enough seats.

It wasn’t the first time her life had been upended. Five years earlier, at age 38, she had undergone a mastectomy for breast cancer — and when the cancer returned a short time later, a hysterectomy and chemotherapy.

Saltzman now shares her insights on loss, resilience, and life through public speaking, including a talk for TEDx in Colorado Springs, CO.

Saltzman has sold approximately 3,801 copies of her book in paperback, ebook and audiobook formats. Below, she shares her production and marketing budget.

“I wrote the manuscript, and then in January of 2012 I got the name of an editor from a freelance writer who had interviewed me for an article. I just wrote to her and asked if she would be interested in editing my book for me, so I sent her the manuscript. It was $75 per hour for editing and $50 an hour to proofread. The total was $1,700.”

“I had a graphic artist who designed the cover and did all of the work on the inside. I also had pictures in the book. I picked the pictures and wrote the captions. She would ask what I thought of the print, the chapter headings (type style), etc. She cleared it with me, but she put it all in the software, and that was about $10,000. She charged me a set amount every month and said I would get a better deal that way. I think it was $1,500 a month.”

“The first time I printed it, I printed 1,500 copies. I decided to use an offset press because I wanted photo paper in the book. I sold those, so I printed 1,500 more and have about 400 left right now. It costs about $6 to print them. This year, I worked with a different graphic artist; she charged me $100 (she charges $50 an hour) to convert the files so that I could use CreateSpace on Amazon. So, now my books will be printed through CreateSpace. If I need more books, they charge $3-4 to print.”

“Once I had the book done and printed it in hard copy, I gave my designer the hard copy files of the book and she turned it into a Mobi file for Amazon and an epub file for Barnes & Noble. It cost $400 for her to do that.”

“I worked with someone who owns a sound studio. That cost $1,500 flat-rate. I did the reading myself. When I was reading it out loud I found a couple of errors (in the text), so I wrote my designer and asked if we could fix them in the next print.”

“I’ve had the website for probably 10 years…But when the book came out, I worked with a [new] web designer to update it and include the information about the book. He charges $50 per hour, and he charged me $400 to update it and add the book in, add the links to Amazon, and a link to my PayPal account so people could buy the book. That’s what it cost to update my website because it was already established.

When I did a TED talk, I paid him to add in a link to my TED talk. He charges me $25 when he does that. So I probably paid him an additional $100 to do those kinds of updates.

I will say, though, that they really encourage you to make it accessible on handheld devices [although I haven’t done this]. [My webpage] looks better on a computer… It probably could be more phone-friendly. I’ve looked at other people’s book websites, and there are other things I could do.

It works fine for me and I haven’t wanted to spend a lot of money to update it. I think it works for what I want, which is if you want to contact me and learn a little more about me, it tells you that. And if you want to watch me speak, you can do that.”

“[Marketing] has actually been a lot of fun. I really knew nothing about marketing. I was an elementary school teacher and I had written newsletters. Certainly there is a lot of PR involved in being a principal and selling a school, but [for my book] I have read tons and tons of articles and blogs and tried to do some of the things that I’ve learned about in them…

“The marketing I did initially was I sent an email out to everyone I knew and said, “This book is out, if you want to get it this is how you do it.” And then I have Facebook pages: my own personal Facebook page, and I have a page for Radical Survivor. I’ve sold books through that. I have an account on Goodreads so I’ve advertised on there; I’ve done book giveaways. It’s pretty funny, I gave away 25 books because they encourage you to [do so], but I didn’t say “only in the U.S.” so I had to send about 10 book to Europe and Canada. I totally lost money on that giveaway because it cost so much to ship books.

The total number of times it has been downloaded is over 20,000 times, since publication of the ebook in November of 2012. That helps because people who wouldn’t normally buy it download it and read it, like it and review it, which I think helps.

In Colorado Springs, I worked with the library, and they had a lot of people request the book, so they bought a lot of copies. They had book club copies, so you could pick up 12 at a time.

I’ve done some paid advertising in our local newspaper and neighborhood newspaper. I don’t think that’s been a big help. The newspaper [ad] cost $400. Then I advertised in the Story Circle network, which is a women writers group. That was about $450. They have a newsletter, and they do some giveaways; it’s all women’s literature. They reviewed my book, which was great. I advertised on Facebook; you can boost your posts—I don’t think it made a difference. I bet I’ve spent a total of $100 on Facebook.

All in all, Ms. Saltzman spent roughly $33,050 on her print book, ebook, and audiobook. She has sold approximately 2,600 paperback copies on Amazon, through her website, local bookstores, at book clubs, and after speaking at conferences. In addition, she has sold 1,162 ebooks and 39 audiobooks. While she doesn’t plan on writing another book, Saltzman does continue to write blog posts on her site.

Her advice to self-publishers? “If you have a story to tell and want to publish a book I recommend self-publishing! Also:

Jordan Nieusma is a graduate of Haverford College and holds a B.A. in English and a French minor. She was BlueInk’s fall intern.

28 thoughts on “The Real Cost of Self-Publishing: Dr. Nancy Saltzman”