Editor’s Note: This is the second in a series of blogs by highly respected genre critic Paul Goat Allen that highlights stellar, not-to-be-missed titles by self-published authors in various genres.

While traditionally published vampire fiction has been relatively flat since 2010, more than a few exceptionally written—and wildly innovative— bloodsucking novels have been self-published in the last few years. The diversity of vampire-fueled storylines is nothing short of incredible. Of the titles listed below, categories explored include post-apocalyptic science fiction, paranormal romance, noir fiction, horror, dark fantasy, and romance!

And while all of these titles are all extraordinarily entertaining, I consider a few (like Meridian Six by Jaye Wells,  Pretty When She Dies by Rhiannon Frater, and Dark Surf by Tina C. Zmak) to be towering masterworks.

So if you’re looking to sink your teeth (no pun intended) into some top-notch vampire fiction, look no further than these ten bloody little gems!

1. Meridian Six, by Jaye Wells: When this deliciously dark novella was released back in 2013, it was something of a departure for Wells, who was best known then for her paranormal fantasy saga featuring half vampire/half mage heroine Sabina Kane. Powered by a brilliantly complicated (and endearing) heroine—Carmina Sargosa, who was captured by a vampiric regime known as the Troika as a kid and raised to be a “poster child for obedient humans”—the story is set in a future where vampires rule the world with an iron fist. The Blood Wars are over and the Troika rule through fear and propaganda. Most of humanity is enslaved but there are small groups of rebels who are still fighting to regain their freedom—and their planet. A masterful fusion of post-apocalyptic fiction, dark fantasy, and subtle social commentary, this is, simply put, the best self-published vampire story I have read in my 20 years of reviewing. And it’s just the beginning of a series that has the potential to change the landscape of genre fiction. Mark my words: It’s that good. The second installment, Children of Ash, is scheduled for release in March.

2. Pretty When She Dies, by Rhiannon Frater: The first installment of this cult classic trilogy is literally unputdownable. Revolving around a woman who wakes up to find herself buried in a shallow grave—and a newly turned vampire—this novel about her bloody journey of self-discovery across Texas is everything a vampire story should be: It’s gruesome, mesmerizing, and existentially profound. It comes as no surprise that Frater makes this list: Her zombie novel The Last Bastion of the Living is the best self-published zombie novel I’ve ever read. (FYI: Although Pretty When She Dies was originally self-published, the entire trilogy sold so well that it was later released by Permuted Press.)

3. Dark Surf, by Tina C. Zmak: This debut novel is so good—so insanely audacious—I actually stood up and applauded when I finished reading it! If Zmak were in the room with me, she would’ve gotten a big bear hug and kiss on the cheek. Zmak reimagines the vampire mythos in classic California style. It’s the story of surfer dude Jake Ryder, who witnesses his friend Cody die while surfing at dusk, the victim of an apparent shark attack. But minutes before his friend died, Jake saw another surfer out in the water with Cody. During his quest to track down this mysterious surfer, he finds a group of surfers who only surf at night… I don’t want to say anything more for fear of giving away too much. This novel blew me away—one of the most imaginative vampire novels I’ve ever read.

4. Crooked Fang, by Carrie Clevenger: Powered by a soundtrack that includes Iron Maiden, Danzig, and Tool, this fusion of paranormal romance and horror revolves around 6’5” vampire bassist Xan Marcelles (imagine Type O Negative’s Peter Steele with fangs), who is trying to keep a low profile living in a backwoods Colorado town. But when his band, Crooked Fang, agrees to do a gig in Denver (against Marcelle’s better judgment), the long-haired bloodsucker gets a little over-exposed–and people around him start dying… The first installment in Clevenger’s Crooked Fang series, this novel is essentially the foundation for what could be an amazing series… The sequel, Traitors, is available—and arguably better than its predecessor. Hard, fast, and undeniably cool.

5. The Shake, by Mel Nicolai: This brilliantly understated novel is a blend of vampire fiction, noir mystery, and deep existential speculation. Revolving around a centuries-old vampire living in Central California who becomes entangled in a mystery involving one of his victims, this novel will resonate with readers long after the reading experience is finished.

6. New Hope, by Steve Hobbs: Set in the remote Maine town of New Hope circa 1986, this exceptional debut is an enticing blend of supernatural fiction, horror, and coming-of-age tale. The story revolves largely around almost 18-year old Miri Jones, the daughter of the town’s chief of police. Attractive, intelligent, athletic, and tenaciously inquisitive, Jones’ dream is to follow in her father’s footsteps and do something similar, perhaps working as an investigator for the FBI. When she discovers the mutilated corpse of a young man while jogging on a woodland trail, she embraces her inner Nancy Drew and vows to solve the mystery, even though her father warns her to stay away… It’s fitting that Stephen King is mentioned in the storyline. This debut novel from Hobbs—who was raised in Maine—is very much comparable in tone and ambiance to King’s debut novel, Carrie. ‘Salem’s Lot meets Buffy the Vampire Slayer. 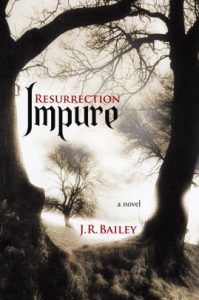 7. Impure: Resurrection, by J. R. Bailey: This underappreciated gem is essentially vampire-nuanced adventure fantasy. Darkly lyrical and deeply philosophical, this is similar to R. A. Salvatore’s Drizzt Do’Urden saga—with teeth. After almost being turned into a vampire, a young necromancer named Koristad was chained and imprisoned in a coffin for 16 long years. Now freed and working as a proxy lightwielder—warriors dedicated to keeping the peace and upholding the laws of the empire—Koristad sets out to avenge the death of his family at the hands of a ruthless usurper known only as the Vampire King. But in the time that Koristad has been confined, the world has changed radically—it’s more lawless than ever, with dark magic users and an assortment of nightmarish monstrosities lurking on the edges of civilization… I love how Bailey reimagines the vampire mythos in a classic adventure fantasy setting. The second installment of the series, Impure: Revelation, has recently been released. Read BlueInk review.

8. Revenant, by Janet Elizabeth Jones: This one came highly recommended from a friend, and I was not disappointed. A delightful blend of historical mystery and romance, the story revolves around a woman named Talisen who seeks to unravel the mystery surrounding 18th century sea captain Arthur Ellory Benedikt, who vanished on the night of his wedding to one of Talisen’s distant ancestors. Enamored with the heroic captain from stories her late grandmother used to tell, Talisen is totally unprepared to meet a man who should’ve been dead for two centuries…. Tonally, this one reminded me a little of Chelsea Quinn Yarbro’s Saint-Germain saga — and that’s a big compliment.

9. Vampire Elite, by Irina Argo: Powered by a highly innovative take on the vampire mythos, this fusion of dark fantasy and erotic romance will appeal to a wide range of readers. The vampire race was born from the blood—and bloodlust—of a vengeful Egyptian goddess. To complement this new race, the angelic Amiti were created to “unlock the love hidden within the vampires.” These beautiful creatures and the vampires were drawn to each other like magnets, and their union (called a blood-bond) was supposed to unlock revelatory powers in both participants. But the vampires, cautious of the Amiti’s potential power over them, found a way around it by hunting down and enslaving the Amiti and keeping them as “bloodstock.” The main storyline revolves around two half-sisters—Simone and Arianna. Born from the first Amiti queen, Istara, Simone’s father is Tor, the vampire king; while Arianna is pure Amiti. In a world where they should be mortal enemies, they are instead the best of friends—but can Simone save her sister from the dehumanizing fate that awaits her? This novel is perfect for readers who enjoy their literary fare full of intrigue, action, and supernatural sex.

10. Resolve and Retribution, by Michael W. Holman: Featuring Old Testament and ancient Near Eastern myth, this romantic vampire thriller begins in unassuming style. Ben Hammonds is a seemingly ordinary guy with a data-entry job at the Oregon Division of Motor Vehicles. But when he discovers that he’s had a vampire guardian since childhood, his mundane existence is turned upside down in an instant. He falls for his beautiful vampiric guardian—a 17th century English noblewoman who was turned when she was 18—but their happily-ever-after is complicated by a bloody vampire civil war and the two lovers are caught in the center of it all. This one is a page-turner—with a more than satisfying ending. Read BlueInk review.

In the last 20 years, Paul Goat Allen has reviewed more than 8,000 genre fiction titles for companies such as The Chicago Tribune, Publisher’s Weekly, BN.com, and BlueInk Review and is an adjunct faculty member in Seton Hill University’s Writing Popular Fiction program. He has published one novel and two collections of poetry and is a member of the National Book Critics Circle. Readers of this blog are offered a $75 discount on the purchase of a BlueInk review by using the discount code D7G2. (This in no way guarantees a review by Allen.) If you are interested in receiving more blogs like this, sign up for our monthly newsletter!