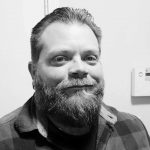 Scott A. Johnson has been publishing horror novels for 16 years—both as a traditionally published and self-published writer. His experience publishing and promoting more than a dozen novels during that time has given him a unique perspective when it comes to not only making it as a self-published author but thriving as one.

BIR: Your first three novels (An American Haunting, Deadlands, and Cane River: A Ghost Story) were traditionally published by small press Harbor House back in 2004, 2005, and 2006. What was your mindset back then? There must have been an obvious sense of accomplishment— of finally “making it”—but the reason I ask is that I’ve heard from many writers that their experience with traditional publishing is far from idyllic.

SAJ: At the time, I was just excited that someone thought enough of my work to publish it. I was also naive enough to think I was going to take over the world on the strength of that first novel. And while it was a good experience to introduce me to the industry, I found out there was a lot I didn’t know. Harbor House has since folded, and I feel like there was a lot that they didn’t do. The thing is, as a new writer, you think of all publishing houses as being basically the same, and that’s just not the case. Harbor House was very small and was financed out of the owner’s pocketbook, which meant they didn’t really have money for things like marketing and promotions. Sure, they sent out press releases, but the bulk of the work was dropped at the author’s feet. And, as a new author, I didn’t have any idea how to be cost-effective to get the most bang for my buck, so to speak, so I wound up actually losing money on those books in the name of getting my face out there to the public. Had I known then what I know now, the marketing would’ve been handled much differently.

BIR: Shortly after that small press experience, you turned to self-publishing. After more than a dozen novels—which includes the critically acclaimed Stanley Cooper Chronicles—I would consider you an undeniable success story. Let’s go back to those early days when you just began self-publishing. What were some of the things you did wrong, and/or wished that you could’ve done a better job with?

SAJ: Oh, there was a lot I did wrong. For starters, I tried to teach myself layout and design rather than spending the money on a pro to do it. I mean, yeah, I saved money, but in hindsight, the book (Droplets) doesn’t look very professional. More, I thought I could edit the material myself. Don’t fall into that trap. The thing is, with your work, you know what you meant to say as opposed to what you did say. And you need someone to be objective about it. I also would’ve been choosier with what press I went with. I mean, you do have choices out there, and it’s your job to vet them to see what works best for you. You have to ask yourself who gives you the best deal, who offers the quality you want, etc. Is it better to go with a smaller company, or with the proverbial 800-lb gorilla (Amazon)? There’s no right answer because everyone’s situation is different. What you want to get out of it is different.

BIR: What were some of the things you did—writing notwithstanding, of course—that helped you sell books?

SAJ: The things I did right, and that I continue to do, focus around the marketing aspects. For example:

BIR: Yes, I’ve been to a few of your readings—and that leads into my next question perfectly. This isn’t acknowledged much but I am a firm believer that personality can dramatically impact sales. I’ve known you for many years now and you’re a walking cult of personality, right? You’re a martial arts master, you’ve been known to wear kilts to formal gatherings, you always seem to be at the center of conversations… You’re very personable, although someone visiting your website may think you’re a deranged lunatic. Two questions here: How important is personality, or at least public persona, to sales? And what advice would you give self-published authors contemplating doing a book signing or a reading or getting a table at a con?

SAJ: Personality is very important for several reasons. First off, this is a notoriously small community with a long memory. Second, your readers, other authors, promoters, etc. can smell a fake a mile off. When you meet me, you’re getting 100% me. Maybe dialed up a bit, but it’s all me. To my mind, personality is very important. Think of it this way: People have a vested interest in whether or not you succeed if they like you or they know you. So, again, humility, but be confident in your work. Proud without being arrogant. For the folks looking at signings and such, here’s my advice: Learn how to speak in public, rehearse, and be nice to EVERYONE. Look, you don’t know who you’re talking to. Could be an editor or could be some random person. But either way, you don’t want to alienate your fanbase. Nothing kills my interest in supporting someone (through buying their books) more than the discovery that they’re not a good person or that they treat their fans like dirt. I refuse to be that guy, so I treat every fan or potential fan like they are important to me, because they are. Not just as a potential sale, but as a human being. And that’s just it…There are stories out there about big-name authors who have lost legions of fans by treating their fans as something lower than themselves. The truth is, without the fans, we don’t have jobs, so I appreciate every last one of them.

BIR: Your website is great! Scott A. Johnson, American Horror Writer—and Creepy Little Bastard. How important is having an online presence to you as an indie writer, and what advice do you give those writers who have no presence?

SAJ: Thank you! I designed it after one of the old “Famous Monsters of Filmland” magazine covers. I think it’s very important to have an online presence of some sort. I’m on Twitter, Facebook, LinkedIn, and have CreepyLittleBastard.com as ways for people to find my work and for me to interact with people. The website is also a great way for me to give free content. On my site, there are links to old-style radio plays I did, free short stories, and even links to me reading some things. I think it’s important because, in addition to being a writer and having to market all of this, you’re also building your brand.

BIR: While horror is obviously a popular genre category, its piece of the monetary pie is substantially smaller than categories like romance/erotica, science fiction/fantasy, and crime fiction/mystery. How hard was it to find your audience, your tribe? This is actually a hugely significant question when it comes to indie writers because if they can’t identify and locate their readers, they’re not going to sell many books.

SAJ: Finding your audience can be tricky. I mean, Facebook is covered with horror-themed groups, but you don’t want to just show up and say “Hey! I wrote a book!” and then disappear. People won’t react favorably to that. Again, it goes back to being personable. So instead of being the type to drop the bomb on them, your marketing approach needs to be the type to actually become part of the group. Back when I first started this crazy business, there was a website that was dedicated to horror and it had a forum board on it. I saw several people join that board, drop the “I wrote a book! Check me out!” post, then never come back. And they were universally hated and made fun of by everyone on the board. So, I got involved with the community. I posted. I contributed to the general conversation. Then, about a month before my book came out, I mentioned “Hey guys, guess what! I’ve got a book coming out!” and everyone on the board bought a copy. Why? Because I wasn’t crass or rude about the whole thing. I was one of them, and they wanted to see one of their own succeed. So as far as finding your audience, there are message boards out there. There are professional organizations out there (I’m an active member of the Horror Writers Association). There are conventions and such that center around your genre. EVERY genre has them. So, it’s on you to do your research and find them. You have to find your audience. And in this age of Google and such, it’s not nearly as hard to do as it used to be.

BIR: You released Shy Grove in 2018—a small-town Southern Gothic horror story—which has gotten fantastic reviews (PW gave it a starred review and called it “an impressive new take on classic horror themes”), and Ungeheuer is being released by Bloodshot Books later this year, in which a group of cavers release an ancient horde of monsters onto a Texas town. Good luck with both titles, and thanks so much for taking the time to do this. Talk about a ton of useful information! Any last words of advice for indie writers out there?

SAJ: Last words of advice: Never stop improving. Read everything you can get your hands on, especially outside of your chosen genre. Push yourself by writing in different genres. Write every day. And, finally, do not give up. There’s an audience out there for everything. You just have to find it.