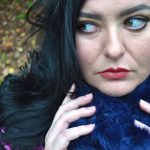 Merriam-Webster defines “prolific” as marked by abundant inventiveness or productivity. The word also perfectly describes Sara Lunsford, best known perhaps for her paranormal romance series like Ambrosia Lane (Desperate Housewives of Olympus, et. al.) and After Dark (Furyous Ink, et. al.). The Kansas native has accomplished much in the last decade or so, publishing more than 60 titles under multiple pseudonyms (including Saranna DeWylde, Sara Wylde, and Sara Arden) and in a variety of genre categories: contemporary romance, paranormal romance, urban fantasy, and mystery/thriller. Noteworthy titles include Fat (written as Sara Wylde), the first installment of her stereotype-crushing Labels romance series, and Tooth and Nail (written as Sara Lunsford), a crime fiction thriller following a detective on the trail of a vigilante killer. She has also published a critically acclaimed memoir about her time as a corrections officer at an all-male maximum security state prison entitled Sweet Hell on Fire.

BIR: Sara, I’ve known you for many years now—and have followed your career since our initial introduction back in 2015. You’ve published more than 60 titles and approximately half of those releases have been self-published. By any measure, you’ve had an impressive career thus far. But your writing journey had an inauspicious beginning, didn’t it?

SL: My break came in 2009 when I entered a competition sponsored by the now defunct Dorchester Publishing. Surprisingly, I won. Of course, we all know how that went. They were already swirling the bowl. Writers were just then starting to talk about their bad experiences without fear of reprisal. I was never paid my advance, but luckily, I was able to get my rights back.

BIR: So, at this point in your career—just after the Dorchester debacle—you’d probably realized that your writing was certainly strong enough to create and retain an audience. Instead of going “all-in” via the traditional publishing route, what were some of the factors that drew you to becoming a hybrid writer and getting into self-publishing?

SL: Money was the biggest factor. Trad publishing is slow. You could sell a book and it might not come out for three years. With indie publishing, you can better fit your work to the trends. That’s not to say to write to trend, but it’s easier to see which niches are underserved and how your work fits into the market. So if you’re a prolific writer, it makes sense to make those words work for you. Further, you’re not giving up 70% of your earnings to a publisher.

BIR: Okay, so fast forward a decade. You’re a full-time writer now—and have sold titles to Kensington, Avon, Ellora’s Cave, Harlequin, and Sourcebooks. Looking back to when you first began self-publishing, what would you say were some of your biggest mistakes?

SL: What errors I didn’t make would be the easier question. I think my biggest mistakes have been:

BIR: Do you mean like stress or self-esteem issues?

SL: ADHD, PTSD, stress, and depression. And procrastination, which is definitely a self-esteem issue.

BIR: I know mental health is an incredibly complicated subject—any advice for writers that are struggling with this?

SL: Writing is my dream job. It’s my passion. It’s what I was made to do. I feel that in my bones. I am always telling stories whether in my own head, or on the page. Sounds beautiful, right? Don’t get me wrong, it is. But it’s also fucked my mental health sideways with an unlubricated pineapple. It will make you doubt yourself. For some, that’s just part of the process. (Read Neil Gaiman’s pep talk on NaNoWriMo about this.) There will be days you look at what you’ve produced and you’ll wonder what you were thinking, and why you ever thought you could write to start with. (You can.) Me? I’ve said aloud, “Why did you ever put your fingers on a keyboard? It’s a crime against literature.” (It’s not.)

I had an editor who rejected my memoir and wrote: “The heroine is a bitch who didn’t learn anything. No one cares.” And my agent forwarded that to me. My memoir is the most vulnerable I’ve ever been in my life. I talk about the things that broke me. About binge drinking, assault, my mother’s cancer… How I put myself back together. I learned to be a better human. A better everything. And the heroine is a bitch who didn’t learn anything, and no one cares? That was a knife to the gut. But I had to take it in stride and keep moving.

SL: I had an editor who asked me to rewrite a book seven times. Full rewrite. I got a 10K advance on that book, but by the time I was done, I’d made something like .04 per hour. I found myself sobbing at my keyboard at four in the morning and then alternating between laugh crying and having panic attacks. I didn’t understand what was missing and the communication just didn’t click. So I own my part in that. But it doesn’t change that it took a toll on my mental and physical health. I didn’t complete a book for two years after that.

Writing is such a solitary endeavor that it’s easy to get lost in your own negative feedback loop. Which is why it’s so important to cultivate real, honest friendships with other writers. More than just networking. No one else really understands what it’s like to do what we do unless you’ve done it. You’re going to face rejection from every angle. Readers will sometimes leave reviews that voice your biggest fears about your worth and your writing. You could have 100 five-star reviews, but that 1 one-star will wreck your world for days. After all, you’ve poured your guts into this thing, you’ve bled on your keyboard and sometimes other people don’t get it. That doesn’t necessarily mean you didn’t do your job, or your work is bad… it’s all subjective. Which is both wonderful and awful at the same time. It can take such a mental toll trying to find that balance between incorporating useful criticisms to enhance our craft, and letting others tell us how we should art. You’re going to face it from loved ones. I had a friend I’ve known since high school ask me when I was going to write a real book. She said that she knew I was as well-read as she was, and that I was basically wasting my time writing in romance. Romance and horror have been my twin passions since I was a child.

BIR: So how do you deal with that?

SL: You have to take care of yourself. You need to exercise however works for you. You need to eat food that is good for your particular body. You need to be aware of your habits. Your mental state. And you need to guard all of those things militantly. It’s a trite platitude, but really: you cannot pour from an empty cup. Our bodies are the cups, and we have to keep them whole and well. Our lives outside of writing are what the fills the cup. Our hopes, our dreams, our joys, and yes, even our sorrows and fears. Our society tends to tell people that we have to keep pouring no matter what. That it’s a virtue to keep pouring after you’re empty. It’s not. Boundaries are important both with the people around you, and yourself. Self-care doesn’t always look like a massage and wine. I mean, sure, it can look like that now and then. But it’s also sitting down and putting your butt in the chair and your fingers on the keyboard when you don’t want to. It can be a course on ending procrastination. It can be going to yoga. It can be trying different nutrition options. It can be a walk in the woods. It can be getting into therapy. It can be investigating medication options. It can be deciding your current situation doesn’t work and looking for resources for how to fix it. It can even be realizing that you’re the toxic person and working to fix that. There is no shame in any of that.

Because ultimately, this thing we’re doing? These stories? They matter. They’re important. And they don’t exist without us. You’ve got to take care of the talent. But that’s hard when you’re the talent, and the bodyguard, and the nutritionist, and the trainer, and the editor… and that’s just what you do for yourself. Not to mention other humans in your life who may need things from you. Guard your time carefully. It’s the only thing that’s finite. And as you guard your time, you’ll find that doing all of those things you need to do for yourself and those you love becomes much easier. This will be something that is always a struggle. You have to be vigilant.

BIR: Quick change of subject. What are your thoughts about indie writers retaining an agent?

SL: Agents can be useful for selling ancillary rights like translations, audio, or even film. Whenever you’re dealing with contracts, it’s best to have someone who can look out for your interests, whether that be an agent or an IP lawyer.

I have had three agents. I am currently single.

Having an agent is like being married in many aspects. It’s a partnership working toward a common goal, and those goals have to be in alignment. The books you sell together are your children and you’re bound for the life of that book. So it’s important to have the right agent. Having no agent is better than having the wrong agent.

BIR: This may be too invasive—but I’m curious. Have you made more money through your traditionally published titles or your self-published releases?

SL: I’ve made more money with my traditionally published titles, but only because of the film rights to my memoir. Those have been consistently under option since it was published in 2012. If we’re talking strictly book sales, I’ve definitely made more money through my indie releases.

BIR: You told me when you were a kid you watched The Exorcist during a slumber party at your house and that initially inspired you to write. What would you tell your younger self, that girl who wrote her first scary story in green-colored pencil?

SL: I wouldn’t tell her anything. Every step of the journey was important to becoming the writer I am now. To being in the position I am now with the experiences and empathy to create these stories. Even the ugly times when I lost hope. I don’t want to tamper with that.

BIR: Great answer! So, Sara, thank you for taking the time to talk with me—and best of luck with Fairy Godmothers, Inc., the first installment of an exciting new paranormal romance series which will be released by Zebra in December!