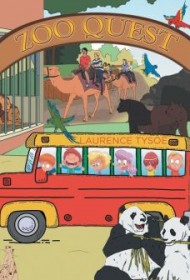 Zoo Quest is a picture book that takes young readers on a class trip to the zoo as part of a project related to animal conservation. “Many animals are under threat from poaching & loss of habitat due to deforestation,” the author tells readers at the beginning of the story.

The book shepherds students through several key exhibits at a typical city zoo. At the monkey enclosure, for example, “the children were excited by the antics of the monkeys swinging from trees…” At the parrot house, one boy puts out his arm to attract a macaw, which then gets entangled “in his mop of ginger hair.”

Along the way, tidbits of information are provided about various species. Readers learn that camels’ humps “contain fats which is [sic] stored for food,” for example, and that elephants and rhinos are endangered and commonly poached (though this is not a unifying theme, despite the narrator’s mention of it at the beginning of the story).

Because this book is very light on plot, it will only appeal to readers with a strong interest in animals. The book’s complex vocabulary (“depicting,” “bravado” etc.) will prevent it from being accessible to early readers, and the text suffers from punctuation and other technical errors (for example: “After their picnic break, the camels came into sight, [sic] a ride on the camels had been arranged prior to the children’s visit.”)

Precocious youngsters who wish to read about wild animals—and who have access to older readers who don’t mind defining terms such as “compound” and “ferocious” for them—may enjoy this book for its range of animals, but ultimately Zoo Quest does not stand out in a very popular genre.