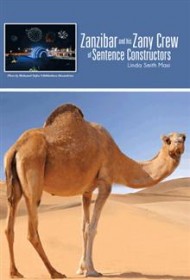 Linda Smith Masi approaches her brief lesson book with a fresh concept for teaching grammar: pairing parts of speech with animal characters, and giving those characters a part in a larger story. In this way, she invites readers to see exactly how sentences are made.

Through wildlife photographs accompanied by explanatory text, we meet animals embodying various parts of speech: Ned Noun, for instance, a giraffe whose long neck allows him to “look over the entire sentence” and “establish the subject” and Veronica Verb, a monkey whose antics express action. They are given the job of reconstructing the knowledge once contained in the Library of Alexandria. The author includes student exercises, an answer key, a list of “Keywords” (words that appear in the story, such as “Verb” and “Camel”), and a section of questions for students to explore.

In theory, Zanzibar and His Zany Crew of Sentence Constructors is a clever teaching tool. In execution, however, it lacks both a well-developed narrative and a clearly defined audience.

Although Masi’s book is short, it has many different sections, meaning that few are fully developed. The story becomes confusing and the animals’ mission vague. Further expansion of the animals’ story, with examples of their antics, would be helpful for introducing and reinforcing the more straightforward grammar lessons.

And while the animal pictures and singsong rhymes clearly aim for a young audience, the text seems to target older students. Masi often relies on dry definitions—“The purpose of a conjunction, you see, is to join together or connect words, clauses or phrases”—that elementary students may not understand.

Ultimately, Zanzibar and His Zany Crew of Sentence Constructors tries to be too many things in its short 55 pages. As a result, Masi’s manual lacks both focus and depth and may have a hard time finding an appropriate audience.