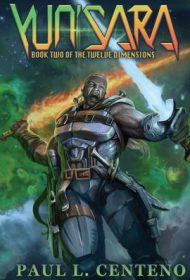 In the second installment of Paul L. Centeno’s unique science fantasy adventure saga (after 2019’s Maz’hura), disgraced starship captain Shirakaya—now working as a freelance operative for the guilds—embarks on a series of missions with her new crew seeking a way to regain her lost power.

Set in the universe known as Ensar—inhabited by powerful agents of Chaos and Order—Shirakaya’s entire existence now revolves around somehow finding a way to reconnect with her lost magical abilities. Once a formidable sorceress, Shirakaya’s innate talents began weakening soon after battling mythical entities (known as koth’vurians) that had supposedly been exiled from the universe eons earlier. The ruling Order’s disbelief of her story led to her being unceremoniously excommunicated.

To help her complete high-risk, high-reward missions, Shirakaya and her crew (who call themselves the Shadow Mercs) team with a misfit group of heroes, including: a seemingly omnipotent Arcane Intelligence named Vokken who used to be an emperor; Dojin, a dogmatic soldier with a decidedly politically incorrect attitude; and a wheelchair-bound barista named Myris who is also an oracle. They accept any and all missions on the many populated planets of Ensar. Jobs include keeping a trancepunk rock legend alive after numerous death threats, locating a mythical creature worshipped by an entire planet, and learning how to save a quickly mutating crew member after he’s bitten by a poisonous monstrosity.

Centeno’s storyline is packed with action and adventure. With Shirakaya’s ongoing battle against the koth’vurians and her search for her place in the universe serving as constant mechanisms for tension, the story is high intensity throughout.

Unfortunately, cringeworthy sex scenes (“Lady Niksa kissed and licked every part of Shirakaya’s body and rubbed her vagina against hers as if hoping to illogically get pregnant by her”) negatively impact the story’s overall high-quality writing.

That aside, this is an innovative and entertaining blend of military science fiction and fantasy adventure.