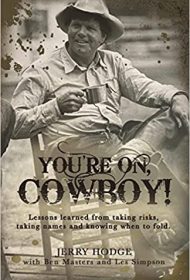 This far-ranging memoir, packed with terrific stories, delivers a country boy’s rags-to-riches tale and a peek into how business and political elites get things done in the Lone Star State.

Jerry Hodge was a newly licensed pharmacist with a $20,000 loan when he opened his first store in Amarillo. He worked every job, from mopping floors to courting doctors for their scripts, meeting challenges large and small. In 1966, for example, when Amarillo tolerated prostitution and sex workers frequented Hodge’s fledging pharmacy, “Margo” requested an extra refill on her amphetamine diet pill. When Hodge refused, Margo pulled out a gun. She got her refill. Frequent expansions in stores and services transformed Maxor Drugs into a billion-dollar company.

Hodge then applied his talents to politics. By 1977, he was Amarillo’s youngest-ever mayor, joining the ranks of influential state Republicans, such as controversial corporate raider T. Boone Pickens. Hodge reveals that after he moved into Pickens’s former corporate offices in Amarillo, he discovered Pickens had bugged his own employees’ desks!

Serving on the state prison board in the late ‘80s, Hodge devised an exercise to test prison security, tasking prisoner volunteers with trying to escape and then being hunted by dogs. Hodge made the poor decision to defend this action on Oprah. He concedes the incident “came across as callous.” The 2017 death of a grandson from a fentanyl overdose leads him to reflect on whether there was something he “could’ve done more from a legal, ethical, or business perspective to combat this crisis…”

Hodge is a masterful storyteller. Many of those stories are naturally self-serving, and some readers may prefer to skip a familiar tale of a well-connected white man getting rich. It may also be troubling for some to witness the moderate, young pharmacist-mayor getting wrapped up in pre-Trump-era political divisiveness.

But most readers will easily overlook such issues to immerse themselves in Hodge’s tale. This is a feel-good story that just about anyone can enjoy.