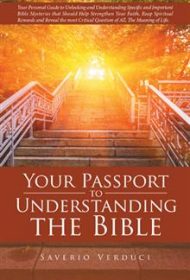 In an informal poll found in Your Passport to Understanding the Bible, author Saverio Verduci argues that only about 15% of the world’s Christians have read even a few passages from the Holy Book. This leads to many people believing in “Hollywood versions” of scripture.” Looking to remedy this, Verduci offers this primer to Sacred Scripture, which he hopes will also help readers deal with difficulties in their lives (the author credits the Bible as helping him deal with the deaths of his parents).

Your Passport begins with short introductions to each of the Bible’s books. Verduci then approaches many hot-button topics, such as: does God exist, and what is the true relationship between faith and reason? He spends considerable time on what happens after death. Regarding heaven, it “is and will always be here on earth,” and we will experience it fully during “the second coming of Christ, where the dead shall rise and be resurrected in three stages.” He also contends that many Christians are wrong to place Jesus as the center of their religion, rather than Christ’s message, which is about ushering in the Kingdom of God.

Verduci approaches his material with enthusiasm and good will. His idea that the beginning of the universe is contained in the Gospel of John and not Genesis is provocative and intriguing.

Yet, often his use of colloquial phrases undermines his authority (e.g. “All that other stuff—well, you can just stuff it in a sack and throw it out with the garbage because it is not true at all”), as does the lack of footnotes and bibliography. Although the author’s intent may have been to share his own personal revelations based on his studies, without sources the text often leaves readers feeling untethered.

Still, Verduci offers keen insights, and his book could serve as a jumping off point for debate for Christians and Catholics about some of the basic tenets of the Bible.