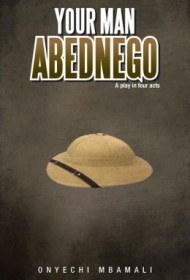 Part political satire, part tragicomedy, part sly fable, Your Man Abednego is a masterful play, set in the African warrior kingdom of Umudimkpa, where race relations between its inhabitants and British Colonialists are muddled and strained.

Beginning on the eve of Mgbe Dike, an annual festival only recently restored under colonial regime, this clever and scintillating piece explores the nature of distorted communication, cultural friction and the dangers of misplaced trust. The title character, Abednego, acts as interpreter between the natives and colonials, exploiting their assumptions to achieve his megalomaniacal ends.

At the outset, preparations are being made for the Mgbe Dike Festival in Umudimkpa, where citizens are recovering from the death of their king and the unfortunate truncation of the succession plan. The High Chiefs and young, hotheaded warriors are in constant debate over how best to deal with their fair-skinned “guests“ A sermon delivered by British missionary Reverend Jones is garbled by Abednego in translation, setting off a series of escalating, incendiary incidents, culminating in a horrific denouement.

Much banter is comprised of metaphoric aphorisms that are enigmatic and comical. Referencing territorial issues (in a somewhat absurd vein) one character remarks: “If a stubborn stranger would not heed a sitting advice, a common ant may teach him that certain grounds are not free seat for careless buttocks.” Mbamali not only creates humor with such adages, but enhances a theme of folk wisdom versus “civilized” reason. There’s irony here, too: Mbamali demonstrates how easily nonsense can become volatile and pernicious, when taken out of context.

Mbamali patiently circles the subject of the play, the vitriolic, Abednego. Through most of Your Man Abednego, we do not see him, only the ripples from his mischief. Mbamali’s poetic, vivid language is absorbing and entertaining and the cynical intellect behind the narrative illuminating. The author’s inclusion of so many plot elements is ambitious, if at times difficult to follow, but the sheer poignancy and wisdom of Your Man Abednego, more than compensate for this.