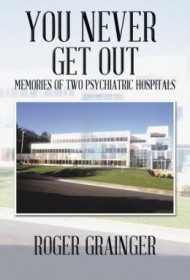 At age 18, Roger Grainger spent six months as a patient in a British psychiatric hospital. Twenty years later, he returned to a similar mental health setting as a chaplain. In You Never Get Out: Memories of Two Psychiatric Hospitals, Grainger aims to compare the experiences.

The book begins with deeply personal — albeit fuzzy — memories of Grainger’s stay at Hillside Hospital during the 1950s. Grainger suffered from schizophrenia. He recalls the excruciating experience of insulin coma therapy, which was used along with electroshock therapy at that time. He also remembers fellow patients who interwove fact and fantasy in such a subtle way that listeners never knew what was real; and he describes hospital staff members as being curt and patronizing.

Overall, he found the experience degrading and confusing, especially since he and his fellow patients believed they had been sane until exposed to the craziness of the “insane asylum.”

Grainger admits, however, that his memories are clouded by his mental illness, which he acknowledges “casts a good deal of doubt on the value and accuracy” of his narrative; even so, there’s life in those memories that’s lacking when he begins recalling ministering to the mentally ill at Western Meads in the ‘70s and ‘80s.

Here, the personal perspective gives way to more clinical descriptions of patients, and Grainger intersperses his recollections with treatises about the state of mental health care, the public’s perception of the mentally ill and a chaplain’s role in a mental health facility. In the end, the narrative suffers from a lack of focus, in addition to its dry nature.

Grainger writes that, unhappily, he believes he’s “failed to make the place come to life.” Alas, he’s right — the setting doesn’t come alive in the way that Hillside Hospital does.

Overall, the book is neither a powerful memoir nor a fully formed discussion of mental health issues. As such, it may have difficulty engaging an audience throughout.