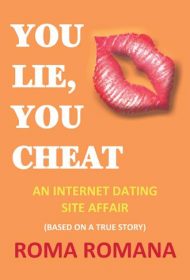 Modern Internet dating meets the romantic hopes of an independent woman of a certain age in Roma Romana’s You Lie, You Cheat.

The story’s protagonist is the self-sufficient but insecure 57-year-old, Sharina Lusso, who hasn’t enjoyed a romance in many years. Pushing her to start dating again, Sharina’s friend Jackie signs her up for online dating. While Sharina is initially resistant, she quickly becomes addicted, and despite finding “more gnomes than in all the garden centres in the British Isles,” soon lands on the profile of handsome English Greek-Cypriot, Greg Writson. It isn’t long before readers learn that Greg, too, is interested.

The tale is told through Sharina’s narration and her online chats with Greg, which are, by turns, everyday chitchat, flirtatious, salacious, and outright suspicious (especially as a love triangle enters the mix). When the two finally meet in person, the romantic intensity increases, as do Greg’s inconsistencies and Sharina’s doubts.

Will Sharina find real love online? Will she learn to trust men? And most importantly, will she gain more confidence in herself? These issues, and Sharina’s sense of humor, propel the story forward.

The novel’s beginning and end move nicely, maintaining readers’ interest. Unfortunately, the middle suffers from too many online chats that add no new information or insight. The characters don’t seem to grow or learn anything new, and Sharina arrives at the same insights repeatedly but ignores them just as often. This effectively stops the story’s progress and leaves both characters feeling a bit flat.

Romana picks up the pace toward the story’s final third and offers a dramatic and unexpected ending, one that catapults the plot forward at lightning speed and concludes on a cliff-hanger. The story is to be continued in Romana’s sequel, You Lie, You Die. Given the high drama of the ending, one hopes this will take both Sharina and Greg into more dynamic and exciting territory.