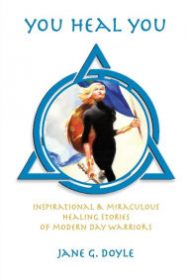 In this inspiring and unique spiritual self-help book, Jane G. Doyle shares her “you heal you” method for curing ailments of any variety.

The author’s method is borne from her battle against chronic pain stemming from sinus headaches, chronic fatigue syndrome, a broken ankle that healed wrongly, and whiplash— issues that lasted for decades, causing unrelenting suffering. Then, a turning point came during a trip to Scotland. At a sacred destination, Doyle picked up rocks that were believed by the ancients to hold healing energy, and she felt tingling sensations coursing through her hand and head. Later, she connected this with improvement in her headaches.

She began to take control of her own healing, employing alternative treatments, including prayer, colonics, Kineseo taping, crystal healing beds, reflexology, rolfing, juicing vegetables. Whenever a method and its practitioner resonated with her, they became one of  “Jane’s Olympians.”  (Part of the book’s charm is in the terminology Doyle has developed, often using her first name, such as “Heavenly Team Jane”;  “Jane’s Glossary” offers definitions at the book’s end.)

Doyle hopes to encourage others to be proactive in their own cures.  After recounting her story, she includes first-person narratives of 17 others who have bravely faced their challenges, ranging from deep grief over the loss of loved ones to mental and physical illness. They healed through acupuncture, massage, avoiding certain foods and other avenues. One woman describes how her panic attacks subsided after finding the courage to leave her psychiatrist for a doctor who used desensitization methods.

This is an inspirational book, one readers can breeze through and come away feeling better. Reflecting on how her method has uplifted her, she writes, “The pot of gold at the end of my treasure hunt initially was good health, but now it is to maintain joy in life. I call those people who have played this game successfully ‘happy healed healers.’ They have healed themselves and encourage others to do the same.”