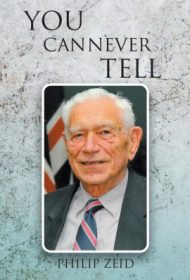 Philip Zeid’s memoir You Can Never Tell illustrates the idea that even small events can greatly impact our lives.

Zeid, who completed this book at age 95, was a WWII Royal Air Force glider pilot and later worked as an executive at various Asian rubber plantations. His book is divided into four parts: his school days and the war years (together covered in about 30 pages); his post-war civilian exploits, and married life.

He writes about several seemingly minor incidents that had monumental unexpected consequences. One occurred when he was prescribed glasses as a teenager but refused to wear them. As the war ratcheted up, he decided to leave school to join the RAF. Had he worn glasses, he never would have been considered.

Similarly, after the war, he was visiting his brother in Australia and had run out of money. His brother told him about a radio repair job, where he subsequently met his future wife, the boss’ secretary. Had he not been broke, or if his brother hadn’t learned about the opening, their paths never would have crossed.

Zeid’s writing style, while never dry, is straight-ahead and businesslike. He includes plenty of anecdotes, both informative and humorous. For example, during the war, he and five others were assigned to impersonate a downed Nazi flight crew for training purposes. Released in the countryside, they were ordered to head back to camp while fellow trainees “hunted” them. Instead, they hung out at the local pub, strolling back to camp as happy heroes once the coast was clear.

The text includes a few minor technical issues: superfluous commas, some spelling errors. Zeid is also short on exact dates; he admits his memory has faded some over the last 75 years.

The author’s war stories, while brief, would appeal to history-minded readers. The rubber plantation stories probably not so much. But Zeid has done a nice job recounting his life, something his family will no doubt treasure.