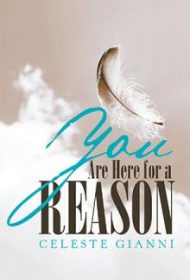 Celeste Gianni has long thought of writing about her health struggles, extrasensory ability, and strength to survive. She just knew—“forces from the other side” told her— that the book she would eventually complete wouldn’t be a smash hit but would transmit her messages. This is a fair assessment of You Are Here for a Reason.

Consisting of 21 brief chapters—some only a page or two long— the book relates Gianni’s enormous struggle to overcome pain and disability from the many autoimmune diseases she suffered from while trying to work, raise a family, and be a wife. Doctors had trouble diagnosing and treating her illness, and some in her life didn’t understand the full extent of her suffering because on the outside she looked fine.

Gianni was frustrated, but since childhood, she always had a “very strong sense of knowing” that unseen helpers were guiding her to escape an early death, move through the suffering, and grow stronger mentally. In the most dramatic example of this, in November of 2004, she and her husband were blocked from leaving Australia for Thailand by one obstacle after another. In December, their hoped-for destination was hit with the devastating Boxing Day Tsunami.

While such episodes are intriguing, the book leaves readers wishing for more scientific information about her illnesses, and to be allowed into her life to know more about her work, and her husband’s work, which involves travel. Additionally, there’s a focus on the airing of grievances throughout. As a result, the narrative often reads like self-therapy, rather than a narrative crafted for a larger audience. Overall, the story lacks the deeper thought and context that would produce insights for readers.

Nonetheless, many will find themselves turning the pages, and her admonition to others similarly suffering will be welcome: “Get up every morning,” she writes, “…don’t ever give up. Research, research, research, and try different things. Use common sense.”