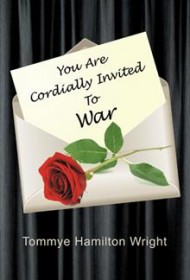 In this novel, World War II brings a world of challenges to a woman’s doorstep in a southern Appalachian town where she is exposed to the realities of war both abroad and at home.

Kay Ann Franklin’s war-obsessed, workaholic husband, Grant, runs the family sheet-metal mills in Lynton, leaving Kay Ann as sergeant master at home. The mill employees and the war effort are paramount, and Kay Ann fears that Grant’s distraction is threatening their marriage, once so strong they were referred to as the town’s “golden couple.” The arrival of a new baby, a son with polio, and a mother facing terminal cancer add further complications. While fighting to sustain domestic tranquility, Kay Ann suffers from battle fatigue of her own.

Then help arrives unexpectedly when Say, a “childlike colored girl,” is hired to lend a hand. Say’s skilled, comforting touch is a breath of fresh air. Despite her pronounced limp and bumptious, unkempt demeanor, the musically gifted girl’s “unconquerable cheeriness” and confidence rescue Kay Ann. When Say is harassed and beaten by a no-good gambler, the ugly event awakens in Kay Ann a sense of justice, and she is propelled to action, with troubling consequences for her and her family.

Wright effectively plays on the war metaphor, even in the clever chapter titles. The war has invaded the sanctity of Kay Ann’s life, and she struggles with the irony of fighting oppression abroad amidst racial and religious prejudice at home.

With her “deep respect for history,” as the author notes in the Acknowledgements, Wright vividly describes segregated churches, hospitals, and neighborhoods in “colored town” and adeptly recreates the fluid vernacular of its citizens.

The conclusion is less effective. The dramatic turn of events in the final chapters is slow in coming, and the last chapter seems uncharacteristically florid, somewhat forced, and abrupt.

Despite this, fans of The Help will likely enjoy this pre-civil rights portrait of small town America and one woman’s personal victory through the storms of war.