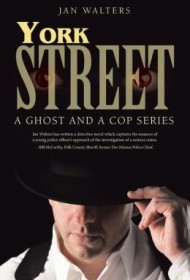 Brett O’Shea, a handsome, young street cop in Des Moines, dreams of being a hot-shot detective like his infamous great-grandfather, Michael. Though Michael O’Shea’s recklessness resulted in his murder in 1933—a case that remains unsolved—his name is still famous among the Des Moines Police Department, and Brett idolizes him.

But unlike his great-grandfather, Brett is a rule-follower, and isn’t one to abide too much nonsense. So when a man calling himself Al mysteriously appears in Brett’s home claiming to be a ghost sent by God to help Brett solve Michael’s murder, Brett is not quick to embrace this bizarre new reality. However, a hauntingly familiar string of burglaries and bodies forces Brett to accept Al’s help in tracking down a killer. As his investigation takes a sinister and paranormal turn, Brett must accept that unimaginably dark forces are at work.

Walters has a penchant for pacing, maintaining a strong momentum throughout the book. While the prose, and particularly the dialogue, often feels forced, the plot is a surprising blend of a modern whodunit cop story and a fantastical paranormal thriller. The story is uncomplicated and at times verges on silly, but Walters’ prose is full of delightfully gruesome detail and her characters have spunk. There is a somewhat odd dose of religion in the book, as Al regularly refers to “the big guy upstairs” with a sense of reverence.

The uneven dialogue and prose tend to distract from the story, but overall, the book offers a light and entertaining read for fans of paranormal thrillers.