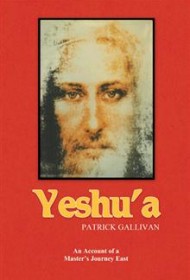 Since the 18th century, the quest for the historical Jesus has preoccupied scholars, theologians and thinkers such as Albert Schweitzer, Thomas Jefferson, Karl Barth and Bart D. Ehrman. Novelists — most recently Anne Rice with her popular Out of Egypt and The Road to Cana novels — have also sought to answer questions about Jesus’ “missing years” from his childhood to the time he began his public ministry.

Now, Patrick Gallivan offers his fictional take on the spiritual training of Jesus. In a series of biographical vignettes, Gallivan traces Jesus’ life, from his birth and childhood through his imagined studies with a Jain scholar in Patala, India, Buddhist holy men in Lhasa, Tibet, Hindu teachers in numerous towns in India, and Zoroastrian holy men in Persia. This unique spiritual travelogue won’t be of much interest to believers who consider the four New Testament Gospel accounts authoritative, but it should intrigue those interested in considering how Jesus may have interacted with holy men of other spiritual backgrounds.

While the author occasionally offers vivid descriptions of Middle Eastern geography or ancient customs and traditions, neither his characters nor his landscapes ultimately come alive. Rather than three-dimensional, the characters, including Jesus, remain subhuman stick figures that are moved from one generic backdrop to another in an effort to propel the story forward. In addition, Gallivan frequently gives in to the temptation to suspend his narrative in order to showcase his extensive research. For example, during an otherwise moving passage in which followers care for Jesus’ crucified body, Gallivan details the 12 ingredients found in anointing balms, as described in the Greek Pharmacopoeia.

While there is information aplenty, along with suitably syncretistic sermonettes, overall Yeshu’a disappoints. Those interested in reading about Jesus’ supposed journeys East will find more to savor in Rice’s novels, Levi Dowling’s The Aquarian Gospel of Jesus the Christ or, for those with a more academic bent, Elaine Pagels’s The Gnostic Gospels.