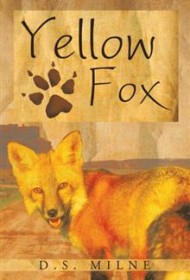 In D.S. Milne’s third novel, a widowed adventurer named Jack Collins, a footloose, half-Navajo sage called Timco (aka Cameron Yellow Fox Arnfinn) and a black hound dog they’ve rescued from the roadside end up in the small town of Estancia al Cabo, New Mexico. The men soon get involved in a dig at a long-forgotten pueblo that turns out to be of major, multicultural significance; meanwhile, the dog cadges kitchen scraps at the local cafe. In the end, Yellow Fox reclaims his lost Native American heritage, as sturdy Jack drives his pickup off into the sunset.

A rural Coloradan, the author displays a convincing grasp of the hard, sun-baked realities of the Southwest (Jack says folks back East are “snot-noses”). He also has a McMurtryesque gift for local characters: a boozy archaeologist named Doc, a small rancher called Large Ruby, and Naomi, the world-wise proprietor of a seedy cathouse. Milne also provides a supporting cast big enough to swamp the entire village–assorted Indians bursting with tribal lore, hard-working Basques, some saddle tramps and gossips, even a detective imported from Baton Rouge. It’s all nicely atmospheric.

Marring the book’s readability, however, are grammatical errors (the author needs a reminder that the possessive adjective “its” and the conjunction “it’s” are different critters), and Milne’s prose can be, by turns, hard to follow, showy or awkward–sometimes all three at once. (For example, his description of the “almost baroque-like style” of a cafÃ© or this lament by one of the heroes: “Yellow Fox was tired of floundering around like a flounder–although he wasn’t exactly certain which one of the over one hundred species of flounder applied to his dilemma.”)

Despite such drawbacks, you can practically smell the refritos cooking here and can’t help but feel the irresistible tug of the New Mexico desert.