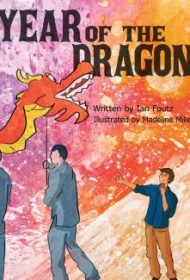 Year of the Dragon by Ian Foutz tells the story of one family’s big move and the lessons they learn along the way.

When ten-year-old Jake Chandler’s father surprises his family with the news they are moving to China, Jake feels trepidation. He worries about leaving his pals and his grandparents. And what if he doesn’t make any new friends?

When the family arrives in Hangzhou, China —- after a 13-hour flight and a 3-hour drive — they discover a world just as complex and daunting as Jake imagined. He doesn’t know the language, and his father works all the time: For the first time in his life, Jake feels lonely.

Soon, though, the family finds its bearings. Jake’s school turns out to be fun, and when Jake tastes Chinese Moon Cakes, it’s love at first bite. One day he meets a Dutch boy who is also looking for a friend. Best of all, Mr. Chandler begins spending quality time at home again instead of working so much.

Foutz has written a thoughtful story about the complexity – and potential magic – inherent in moving to a new country and experiencing a new culture. His descriptions of China are vivid and imaginative, and his writing often lyrical. Feeling lonely, Jake stops to watch the sun set over a lake: “The sun danced across the water, and the wind carried the spray in my face while I leaned on my umbrella and breathed patience in my bones.”

Year of the Dragon would benefit from a more age-appropriate design. The book has far more text per page than traditional picture books and isn’t really aimed at young readers, but those closer to Jake’s age of 10. This creates a problem, as 10 year olds may feel uncomfortable reading what looks like a child’s picture book.

That said, anyone interested in China, lovely writing, or insight into overcoming the challenges of an international move will find Foutz’s story a treat.