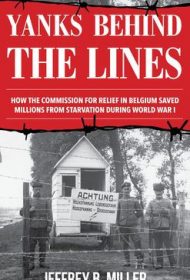 Yanks Behind the Lines tells the story of American relief efforts in Belgium and northern France during WWI.

When Germany occupied Belgium during WWI, the civilian population was cut off from its food supply and faced starvation. An American mining engineer named Herbert Hoover organized aid efforts through his Commission for Relief in Belgium (CRB), which worked closely with the Belgian Comité National (CN), led by financier Émile Francqui, to feed a nation of millions. Later, the CRB also operated in parts of France.

Jeffrey B. Miller ably relates the tale, including the CRB’s rivalries with other aid agencies and the logistics of supplying Belgium via Rotterdam and through the country’s extensive canal system. The author recounts the CRB’s conflicts with both the Belgians and their German occupiers: Germans feared the organizations’ delegates¬–young Americans who traveled the country to ensure the aid was distributed properly¬–could be passing military intelligence to their adversaries. Francqui and the Belgians felt that the food should be distributed by Belgians, without interference from American upstarts. Hoover fended off accusations from both sides.

The author also relates the hardships of the German occupation, including deportation, forced labor, and a deadly electric fence that snaked along much of the Belgium/Netherlands border. As the U.S. prepared to enter the war against Germany, the American CRB contingent in Belgium and France was forced to withdraw.

Miller’s telling of this forgotten WWI tale is well-documented, detailed, and crisply written. His engaging narrative approaches its topic from many perspectives, including the viewpoints of Hoover, the Germans, and those living in Belgium.

If there’s an issue, it’s that the book’s larger purpose seems unclear. Why is the author telling this story now? Is it to rehabilitate Hoover, best remembered as the president who botched the response to the Great Depression? Did the project influence international humanitarian movements after WWI? Pulling the lens back a bit to give a wider context would have lent the story more impact.

Nonetheless, this is a well-told tale, one bound to interest WWI enthusiasts and fans of untold histories.