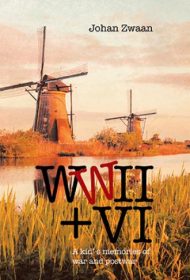 Johan Zwaan was just five years old when the Nazis invaded his native Holland. Still, he recalls seeing hundreds of German planes flying over his hometown of Gorinchem (also known as Gorkum), located in the western part of the Netherlands. That memory launches this memoir about the five years Germans occupied Gorkum, as seen through a child’s eyes.

Zwaan’s father, a family physician, was part of the underground, helping treat, hide, and otherwise protect the city’s small Jewish population. He kept his activities (mostly) secret from his children, but Johan and his siblings had their suspicions. At one point, they found a hidden space in their home full of what they deemed “treasure”: silver, gold dinnerware, jewelry and a radio. The items, which his parents were hiding, belonged to a Jewish family.

Many such tales in this all-too-brief book offer an intriguing view of how the war impacted everyday citizens. Heat and electricity – and baths – were luxuries; food was even more scarce; proper school was canceled, although families set up their own version; bombing raids were a fact of life. And for all their harsh regulations, the Nazi soldiers liked kids. The feeling wasn’t mutual.

“. . . [S]tealing from the enemy was a good thing, “ Zwaan writes, noting that sugar was non-existent. “Every day, large wagons loaded to the brim with sugar beets, confiscated from the farms, passed through our street…We would sneak behind the wagon and grab some of the beets. The lower ones were the easiest to get but when pulled out, sometimes would cause a little avalanche of the ones located higher up.”

Such small, yet telling details run throughout the narrative and are the book’s highlights. Unfortunately, chapters devoted to military activity tend to be rather dry and can feel out of place. Readers unfamiliar with the battles and cities mentioned might want to skip them in favor of more of young Johan’s adventures in Gorkum.

The book’s value is that Zwaan lived these stories. Those interested in this troubled time in world history will appreciate the author’s perspective.