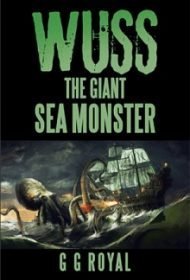 Stories that pit man against nature can be literal or metaphoric; sometimes the tigers and bears are meant to show readers aspects of themselves. Author G. G. Royal toys with this theme in Wuss, the Giant Sea Monster, which features an actual giant squid along with commentary about alcoholism.

The story opens with an untitled chapter describing a creature approximately 60 feet long in ways ranging from detached and scientific to breathless and fragmented—sometimes both at once: “Ramming their target with what has been described by scientists as having the speed of a fast-pitched baseball and then grasping their victim in a certain death grip.” Next, a chapter titled “The Birth” explains how one of these creatures came to live off the coast of Florida. Finally, Chapter One introduces Brad and Candy.

Brad is in love with Candy, but she’s a heavy drinker and is cheating on him. On a boat on a trip to Florida, they run into the giant squid—with dire consequences. Royal sets Candy up as a villain. She causes a scene in a club on their vacation, and then their ill-fated boat trip acts as a kind of moral comeuppance.

At just 39 pages, this is really a short story, rather than novel. At book’s end, Royal notes that he hopes the tale will help people understand the dangers of binge drinking (but that theme is just a tiny fraction of the story).

Such a brief narrative needs a tight focus, but this one meanders and has problems with misused words and strange sentence construction: “He was wondering how was he contemplating standing there and getting a tissue sample.” A pat conclusion ties up all loose ends in an unrealistic manner; a longer story would allow for more realism and complexity.

Whether Wuss, the Giant Sea Monster is supposed to be a moral fable or merely a ripping yarn, it needs editing and expansion to keep readers hooked.