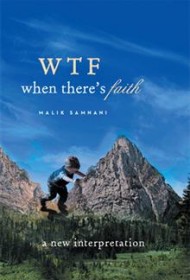 Malik Samnani looks at the world and sees moral and social collapse. He perceives a new Dark Age approaching and attempts to counter this trend with an enlightened spiritual vision. This slim volume contains Samnani’s treatment for contemporary ills, a tonic both mild and sweet.

Samnani sees a society rent by extremism and polarization and offers an alternative based on the established faith traditions without succumbing to dogmatism or sectarianism. The author relies on teachings from a variety of religious and spiritual traditions to discuss questions such as the relation between science and religion, and between religion and spirituality. He also discusses evolution and progress, the family, the role of technology and other contemporary issues. Samnani sees no opposition between faith and knowledge, as he sees none between science and religion. His tone is measured, with an emphasis on tolerance and pluralism.

More interpretations than arguments, Samnani’s ruminations don’t proceed in a linear fashion from established axioms, in the manner of an academic philosopher, but stroll around the issues, seeing them first from one angle and then another.

Throughout these discussions, presented in short chapters of around three to five pages, runs the thread of a faith informed and enlivened by intellect. The book offers no systematic social or political program but rather reflections intended to open readers to new interpretations of problems both ancient and modern.

With its short chapters, broad interests, and air of calm reflection, this book resembles an updated version of Khalil Gibran’s The Prophet. Samnani’s prose does not rise to Gibran’s level but, like the latter, the author’s vision is deeply humane. This book is unlikely to change the world but it is a positive contribution that reflects ancient wisdom in a contemporary context.