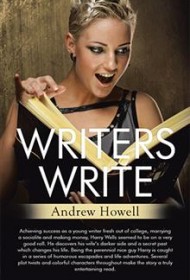 Writers Write is a compilation of two fast-paced mysteries: the titular, 120-page novella and a 40-page short story titled “The Kansas City Kennedys.”

In the former, Harry Wells is a writer who unwittingly marries a woman with a shady past. (Her father appears in the companion short story). What follows is a tale of misplaced trust, drugs, fortunes won and lost, sex, lawsuits, and true love, all conveniently tied up with a timely discovery.

The story features a breezy narrative style but is a bit too convenient and contrived. (Harry effortlessly earns extraordinary fees for his work; the sexy Brazilian who rents the apartment next door finds him irresistible, and a brilliant—and exceptionally well-prepared—attorney shows up just at the right moment to save Harry’s day in court.) While a quick read, the lack of character depth makes it hard for readers to care about the players. And although the book is easy to pick up and put down, the character issue means there’s a risk that once put down, readers may not pick it up again.

The second offering, “The Kansas City Kennedys,” is a fast-paced, action-packed—although clichéd—short story about a mobster who is too good at his job, earning the attention and ire of West Coast gangsters and Colombian drug kingpins as well as the Italian mob with which he’s affiliated. It, too, is a fast read, although areas of vague writing (saying a “stunning brunette…was unique” without explaining why or how) make it less than it could be. Additionally, spots of dialect and “gangsta” slang don’t ring true.

Both stories fit most closely into the “noir” detective genre, but lack the grittiness and ethical moral dilemmas those stories often feature.

Nonetheless, the book offers rewards. While readers may not uncover the “humorous escapades” promised by the jacket blurb, the quick pace and easy format—combining the novella with a short story—would be perfect for a day of airports and planes.