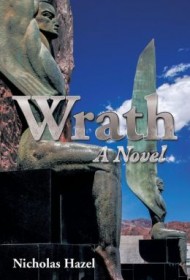 Four unwitting college professors find themselves embroiled in murder and a terrorist plot in this contemporary thriller set in Tucson.

The Moors and the Mantinis are sharing a vacation house in the hills high above Tucson when they’re invited to a party hosted by Pedro Diaz, a man obsessed with Mexican nationalism and what he perceives as the great injustice of the Gadsden Purchase of 1853, which gave the U.S. claim to land in New Mexico and Arizona. Shortly after the party, a fire destroys their host’s home, and Diaz is believed dead. What follows is a series of murders aimed at protecting the secret of Dies Irae, Latin for “The Day of Wrath,” a plot conceived by Diaz to retaliate against the U.S.

Despite a plot with great potential, the book has many problems, chief among them, grossly underdeveloped characters. From the beginning, the Moors and the Mantinis collaborate to find answers to both the nature of the fire that ostensibly killed Diaz, and to examine the man’s connection to Dies Irae. Before long, however, the Mantinis simply disappear from the narrative, leaving the bland and uninteresting Moors to solve the mystery.

The author repeatedly writes sentences with no subject, for example, “Must have confirmed that I was still there.” He does this with multiple characters, indicating that this isn’t meant as a character’s personality quirk so much as a writing error.

It may not have been the author’s intention to write a cozy account of attempted mass destruction, but that is the overall tone of the book. The novel has an almost tongue-in-cheek quality to it in which the author indulges his sense of fun despite its more serious issues. He is more specific about the wine his characters drink than the suffering about to be unleashed on the American Southwest.

In sum, given the many areas that need attention, this book isn’t likely to appeal to a wide readership without revision.