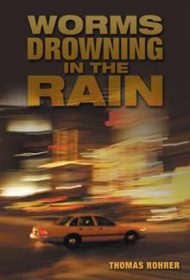 Calvin’s restless search for identity takes him to a crude cabin in the Maine woods where, a friend says, he’s “out in the middle of nowhere, doing nothing”; to tony Newport, R.I., where he scarcely fits at all; then back to 1980s’ New York, where he bounces from one bad gig to another—taxi driver, 7/11 clerk, busboy, gay prostitute—while trying to figure out whether or not he’s a writer. Drugs? Booze? Women? They’re all in the mix.

Rohrer is a wit and may be at his best when describing Cal’s motley collection of friends and antagonists: in Maine, the drunken ex-decathlete Drake and his girlfriend; in New York, many lost souls, none more vivid than the comically vile Karl Schnitterhause, a vocal racist, anti-Semite and sexist who inhabits the narrative like an evil spirit.

Rohrer’s prose style is precise and ornate, but as Calvin’s spiritual crisis deepens, the author shifts into an amalgam of what reads like the raw improvisation of the Beats and the high-art mind-streaming of James Joyce — or it could be gibberish ( “The bleachers wobbled and I cringed shaking a hand that always took and smelled what he’d never lose…”). Either way, it effectively reflects a wandering, disordered mind.

By book’s end, we still don’t know if Cal’s a writer. But despite this overly long narrative, it’s clear that Thomas Rohrer is.