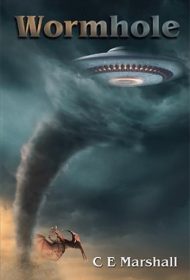 The second installment of C E Marshall’s science fiction/fantasy trilogy (after 2019’s When Evil Calls) continues the adventures of Chris, his wife Mary, and others as they attempt to save an alien race from potential annihilation by a mysterious enemy.

Having, in the previous book, just saved the inhabitants of planet Paxlene from a deadly darkness that forced them underground and witnessed the horrific aftermath of an asteroid strike on Earth, the Starseeker crew begins a new adventure when a distress call leads them through a black hole that is actually a wormhole.

The inhabitants of the planet Traymar—“weredragons” that can take human and dragon form—are being terrorized by mass delusions. Visions of conflagrations have kept the Dragonalia race from exploring and colonizing other continents. As Chris and company begin to investigate, a drop of Dragonalia blood accidentally lands on Mary’s hand and she “instinctively” licks it off. This ignites a metamorphosis, and Mary eventually transforms into a golden dragon.

As Mary struggles to come to grips with her new—and wondrous—reality, Chris travels to one of the unexplored continents and finds a sentient race that is battling a mysterious enemy of its own.

The story’s action is fast and furious as the characters leap from one adventure to another. But the narrative suffers from numerous fatal flaws. The characters are barely described and without internal depth. The plot is contrived in places, redundant, and frequently incoherent. Sequences that should be infused with rising tension have none. Potentially epic battle scenes are over in a few sentences.

Additionally, there’s very little world-building and a conspicuous lack of overall description. For example, the magic system of one continent is explained this way: “…the meat and vegetables are cooked by magic, so we don’t need fires.”

A lack of emotional connectivity between one-dimensional characters, superficially described worlds and an absence of tension throughout make this a disappointing and forgettable read.