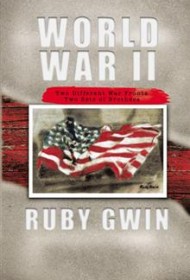 This engaging history follows several American soldiers throughout their tours of duty during World War Two, on both the Pacific and European fronts. Some are from the author’s native Indiana, and at least one soldier shares her last name and may be a relative, although she makes no mention of this.

The author’s main concern is that Americans remember the sacrifices of those who served their country during this tumultuous time, and to tell the veterans’ stories, especially since so many did not talk about their wartime experiences; it was something they kept to themselves. This book captures their bravery and heroism, preserving their accounts for future generations.

The book is divided into two sections, covering each front separately, and presents all the major conflicts of the War, including the Battle of the Bulge, the liberation of Paris, Iwo Jima, and Midway. In addition, it mentions details not usually noted in most popular histories, such as the fact that medical officers rarely wore the Red Cross insignia during battles, as they provided snipers with easily identifiable targets. While this fact is repeated several times throughout the book, others could have been discussed more, such as the Sino-American Cooperative Organization, composed of American military men living in China who observed Japanese ship movements and fought alongside Chinese soldiers.

World War II’s accessible style makes it a good choice for veterans’ families, as well as general readers with some knowledge of the history to draw on. Combining personal stories with military movements and tactics, as well as portraits of the Allied commanders, author Ruby Gwin tells the courageous, exciting true stories of young men who “overcame the best Hitler’s soldiers could throw against them.”