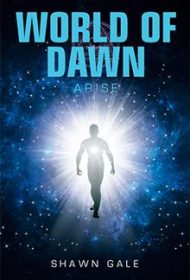 Shawn Gale’s entertaining debut novel – the first of a projected young adult series that audaciously blends adventure fiction, science fiction and fantasy – chronicles a group of adolescents inexplicably transported to another world and their heroic efforts to find their way home.

The first-person narrative is told from the point of view of Tanner, a teen whose felony-filled past has led him to Halton House, a remote Pacific Northwest farm established to give troubled teens an alternative to juvenile detention. The story begins with Tanner on the brink of turning his life around. Working with animals on the farm has started him on a journey of self-discovery. He has begun making connections with Colby and Simon, teens from different but similarly troubled backgrounds, and two nieces of Conroy, the man who runs Halton House.

But when their van is caught in a landslide as they return from a basketball game, they find themselves in a primitive world inhabited by monstrous birds of prey, man-eating insects and human tribes. Surrounded by predatory wildlife, with Conroy incapacitated by a broken leg, the teens are losing hope, especially when they’re captured by an indigenous tribe of Indians. But when they hear a tribesman speaking perfect English, their reality is turned upside down.

While the book is aimed at a YA audience (violence is muted, for instance), adult readers – particularly those who enjoy storylines featuring portals, interdimensional doorways, jumpgates, and the like – will find Gale’s voice intelligent and insightful and his narrative thematically stimulating. (For example, a man who had traveled through a stargate in Mexico in 1914 and is inhabiting the children’s new world, is presumably American author Ambrose Bierce, who disappeared while traveling with Mexican revolutionary Pancho Villa;  Gale makes his identity clear through subtle references.)

Contemplative themes of friendship, accountability and redemption notwithstanding, this action-packed adventure featuring a cast of endearing misfits is so addictively page-turning that readers may find themselves finishing the novel in one sitting.